Pics: Chrissy Teigen shows off her green fingers in the latest edition of Esquire

The American supermodel Chrissy Teigen recently sat down with the guys from Esquire for a chat and a bit of light garden work… as you do.

Speaking to Esquire, the 28-year-old from Utah talks about food, diets and her, eh, butt… or more to the point, the fact that she doesn’t like her butt. Say what???

"I didn't know butts were a thing until I was twenty-three. Then came Jennifer Lopez and people were like, 'That butt is great.' Now you have to have a butt. It sucks for me." 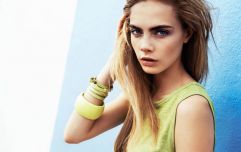 END_OF_DOCUMENT_TOKEN_TO_BE_REPLACED

"I have a little half-Asian butt, and the more I work out, the more I try to get it bigger, it's just going to get flatter and harder."

Well, if you’re reading this, Chrissy, we’d like to tell you that you look just fine to us.

For more pictures of Chrissy’s Esquire shoot head over here or alternatively you can pick up the September edition of Esquire.

Open gallery
popular
Welder awarded €15,000 for unfair dismissal despite admitting to drinking alcohol before work
Netflix has just quietly added 30 big movies to its library
10 years ago today, the scariest movie ever made (according to science) was released
Netflix reveals full line-up of new shows and movies arriving in October
Man in his 40s dies following assault at funeral in Kerry
Amazon Prime Video has just added 37 big movies to its library
It took five long weeks, but The Rings Of Power is finally fantastic
You may also like
3 years ago
Fitness model tries to take picture with a pig, is bitten on the arse
9 years ago
Pic: Still the best Bar in the world
9 years ago
Pic: Sorry Andre, we have our new favourite Villas Boas
1 month ago
Take a Hike: Galtymore and Cush Mountain Loop
1 month ago
TUI pilot turns plane around to pick up 'crying girl' left behind
1 month ago
REVIEW: Bat Out Of Hell is a horny ride through a musical apocalypse
Next Page
Life | 8 years ago
9
shares

Pics: Chrissy Teigen shows off her green fingers in the latest edition of Esquire