Pics: Irish lads in Ibiza convince English friend to get ‘Yop Westmeath’ tattooed on his arse

Apparently it was “the best €50” the lads ever spent.

Story time, children. Gather around and let us entertain you with some tales from Ibiza… so you know it’s going to be good.

JOE reader Eimhin O'Donnell recently sent us in the following picture of an English lad with the words 'Yop Westmeath’ tattooed on his arse.

The pic was taken while Eimhin and his mates, Matty Cunningham and Élan Darcy, were enjoying some downtime in Ibiza last summer. 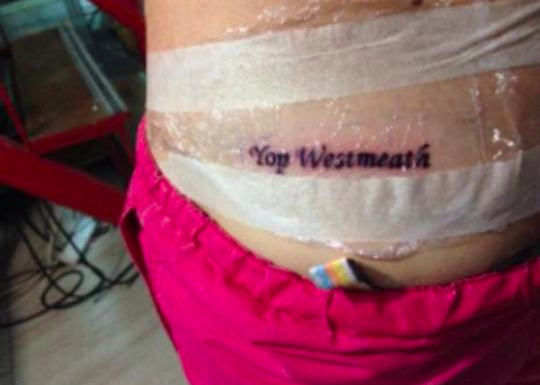 END_OF_DOCUMENT_TOKEN_TO_BE_REPLACED

“Myself and two of my mates went to Ibiza for a week last summer. We repeatedly shouted the phrase "Yop Westmeath" and on about the third day we were on a boat party and met these three sound English lads from Chester.

“We kept repeatedly saying "Yop Westmeath" as usual. The next morning we were going to get a bit to eat and one of the English lads called Aaron said he wanted something to remember us by. So we jokingly suggested that if he got ‘Yop Westmeath’ as his first tattoo, we would pay for it. 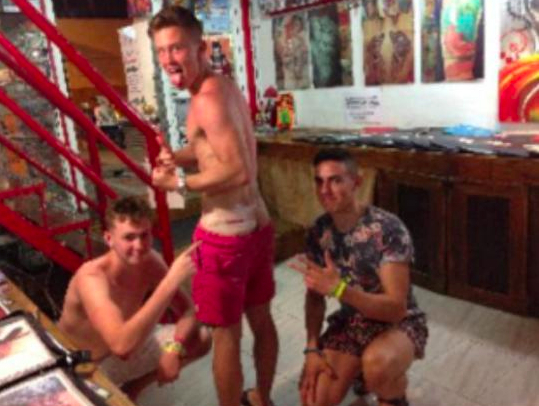 “So a couple of days passed and the phrase was still being used every chance we got. We even overheard Aaron trying to repeat the phrase but instead he was saying ‘Gok Westmud’. The next day Aaron had his first tattoo and pledged his allegiance to Westmeath…

END_OF_DOCUMENT_TOKEN_TO_BE_REPLACED

“Sometimes when any of us are having a bad day we just remember that there is currently a lad walking around England who has never stepped foot in Ireland with ‘Yop Westmeath’ tattooed on his arse. Easily the best €50 we've ever spent.”

And that was easily one of the funniest reader's stories we’ve ever read. Thank you Eimhin and thank you Westmeath.

Massive thanks to Eimhin O'Donnell for sending this our way.

House of Rugby Ireland · Munster can't beat Leinster, Six Nations squad and John Cooney interview
popular
RTÉ Prime Time footage shows tanned Irish holidaymakers returning from Lanzarote
Holly Willoughby criticises influencer for travelling to Dubai during pandemic
QUIZ: Can you name all of these countries just from one of their cities?
Teenage boy stabbed to death in Dublin
New Zealand set to close its borders for the entirety of 2021
QUIZ: Do you know the collective name for these groups of animals?
Roz Purcell might want to delete this old tweet about Donald Trump...
You may also like
1 year ago
25 of the funniest tweets you might have missed in October
1 year ago
WATCH: RTÉ raised their game with their Halloween reporting on Thursday
1 year ago
Personality Test: What percent clown are you?
1 year ago
WATCH: The trailer for Season 14 of It's Always Sunny features melons, poison and laser tag
1 year ago
WATCH: Liam Gallagher weighs in on the Noel Gallagher VS Lewis Capaldi beef
1 year ago
Tourist told she's wearing swimsuit wrong after her privates were 'hanging out'
Next Page