PICS: Take a minute out of your day to see this beautiful story of one man and a swan in Limerick

The most heartwarming story you'll read all week.

Sometimes the two right people are in the right place at the right time. This was the case on the Sarsfield Bridge in Limerick on Sunday as good guy Jack McGrath and Limerick-based photographer Deirdre Power were brought together to do something special.

Traffic was brought to a halt on the bridge as a result of a swan who had made his way on to the busy road. That's when McGrath, who is now being called "The Swan Whisperer", stepped in. 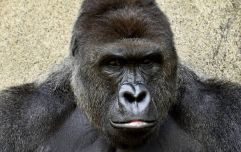 GRAPHIC CONTENT: A gorilla has been shot dead after a child fell into its pen at a zoo

END_OF_DOCUMENT_TOKEN_TO_BE_REPLACED

The brilliant photos snapped by Power tell a love-story for the ages, just in time for Valentine's Day as well. Jack should be a busy boy tomorrow, as we can see he really cares about birds.

Take a look for yourself, some of the pictures are absolutely class.

McGrath was praised by Limerick Animal Welfare for his actions, and the comments section on Facebook has been extremely generous to him. Well deserved too.

popular
The JOE Movie Quiz: Week 80
QUIZ: How well do you know Elf?
QUIZ: Can you guess these European countries from their outlines?
Donald Trump paid $3 million for recount that uncovered more Biden votes
The JOE Movie Quiz: Week 79
The JOE Music Quiz: Week 35
Gardaí search suspected shebeen in Kerry
You may also like
3 weeks ago
Calling all pub owners! One of Ireland’s leading restaurants is offering franchise opportunities in these 14 locations
4 weeks ago
Rare "blue moon" will be visible over Ireland on Halloween night
1 month ago
How to get 20 bets for €2* on the next EuroMillions jackpot + free spins
1 month ago
Coca-Cola to bring new Topo Chico Hard Seltzer to Ireland
1 month ago
No trick or treat? No problem, thanks to MunchDiddly's, Ireland’s new online sweet delivery service
1 month ago
Big Mac to be available for €2 on McDonald's app
Next Page