PICS: All of these chancers decided that they weren't going to work due to the heatwave

You really have to love Irish people.

Here's hoping that you made the best of the mini-heatwave that graced Ireland yesterday because the temperatures should drop with showers being expected in certain parts of the country.

Ah well, at least we can say that parts of Ireland reached the 30C mark yesterday with Mount Dillon in Roscommon recording the highest temperature in the country.

END_OF_DOCUMENT_TOKEN_TO_BE_REPLACED

The cliche says that you should make hay while the sun shines but it seems that some Irish people have a very different interpretation of that saying. Essentially, these four people reckon that it means 'when there's even the slightest bit of good weather, down tools and head off from work'. We fully agree.

Mick Bagnall tells us that this sign was up on the door of O'Duinns Barbers in Rathangan, Kildare. 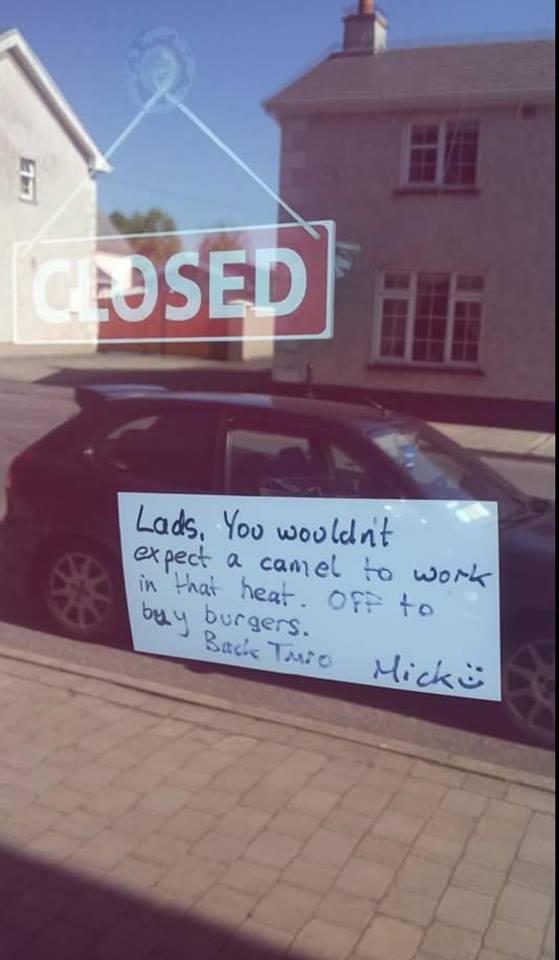 JOE reader Ryan Fulton sounds like he has the soundest boss in Ireland because he was given Monday night off to go on the beer and when he returned to work, he saw this sign that was outside of Egans Bar, Kilkenny. 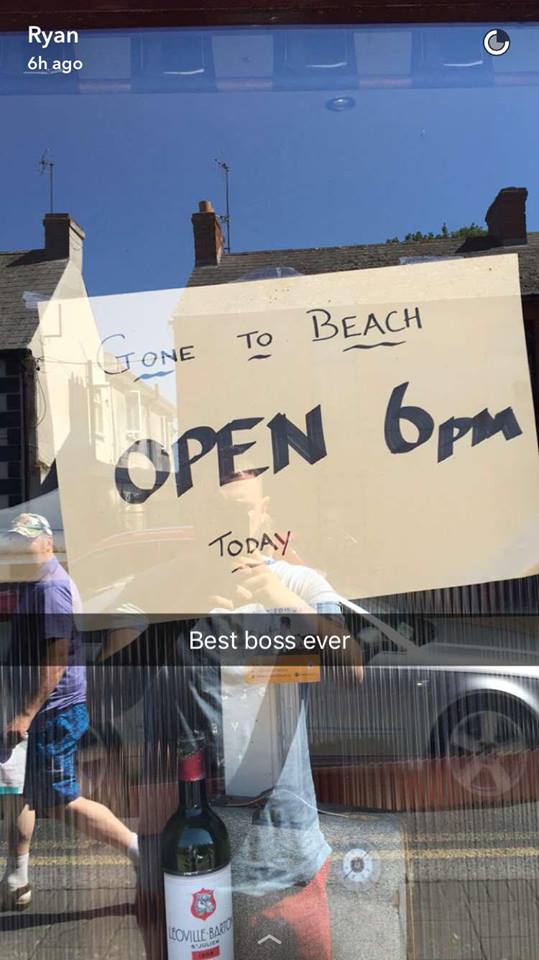 Maeve Aldridge tells us that the coffee shops in Naas really couldn't be arsed opening yesterday because the weather was so nice. 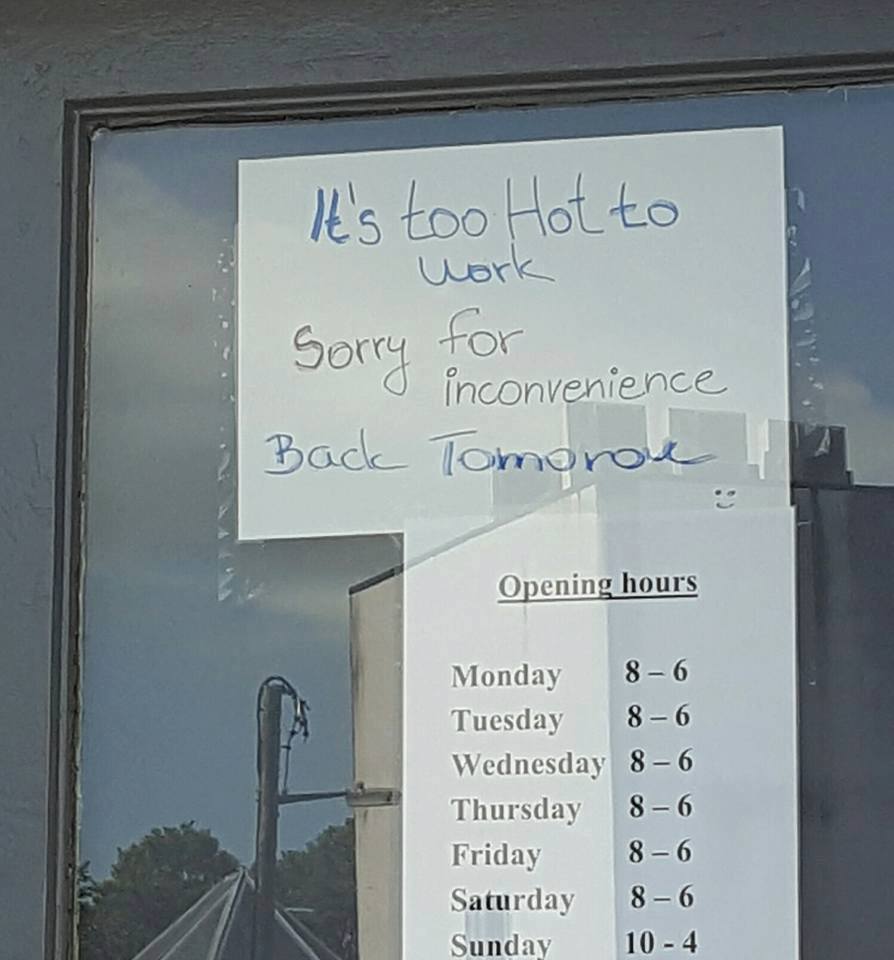 Last but not least is Josie McCormack-Costelloe. Her cousin owns the Proper Chopper Barbers in Moate, Westmeath and we applaud his incredibly clever business strategy. 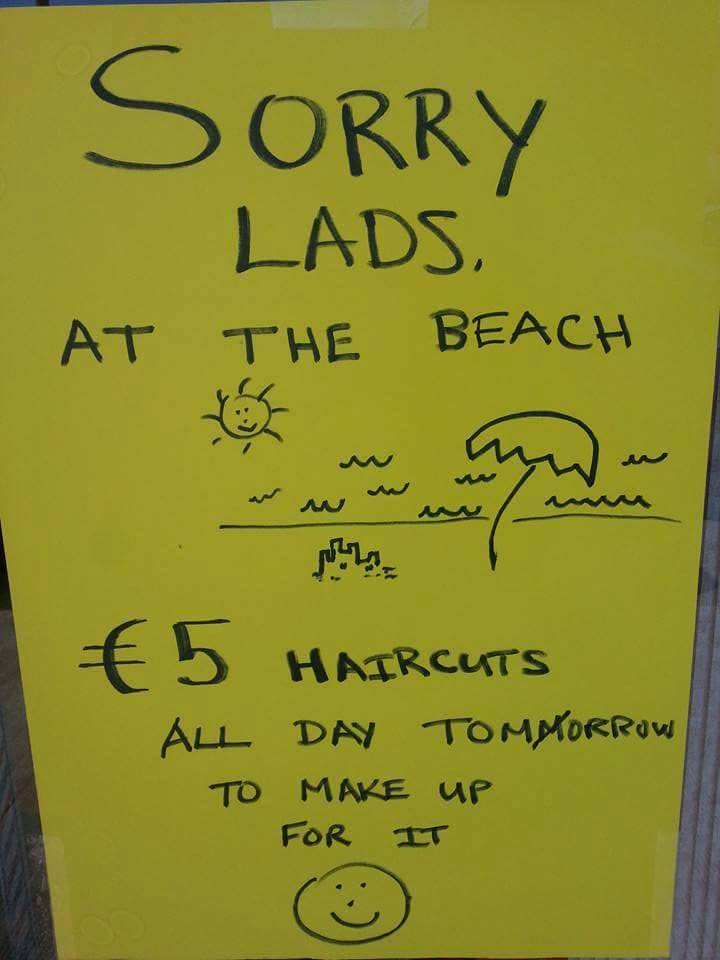 popular
One of Keanu Reeves' best movies has just been added to Netflix
"Clear as daylight" that unvaccinated people are a risk to themselves and others - Taoiseach
Met Éireann issues Orange weather warnings for five counties ahead of Storm Barra
QUIZ: Do you reckon you can get 15/15 in this General Knowledge Quiz
A terrific crime thriller is among the movies on TV tonight
The JOE Movie Quiz: Week 131
QUIZ: Can you get full marks in this General Knowledge Quiz?
You may also like
2 days ago
Irish people among the heaviest drinkers in the world, new survey finds
3 days ago
Here's the line-up for this week's episode of The Late Late Show
4 days ago
Game of Thrones Studio Tour will open in Ireland in February 2022
2 weeks ago
Ireland is the 11th most affordable country to buy a home in, says new study
3 weeks ago
Young fan Ronaldo gave his jersey to reveals what he said to her
1 month ago
"It’s obvious these guidelines were issued by Government without any meaningful consultation with the hospitality sector."
Next Page