One of those 'exactly what it says on the tin' stories, folks...

In what has become something of an annual, er, gag, the pornography giant has done the honourable thing and shattered the paywall - is that how it works? - on the single most romantic day that the world has ever known.

You can also create a personalised Valentine's e-card for that special someone in your life, as read aloud via a video generator that features some of the industry's big names.

Probably. We have absolutely no idea who these people are, of course. 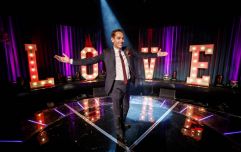 END_OF_DOCUMENT_TOKEN_TO_BE_REPLACED


popular
Motorist in Kildare caught driving with tax 13 years out of date
QUIZ: How well do you know Will Smith's movie career?
Fine Gael preparing to go into opposition following parliamentary party meeting
QUIZ: How well do you know the Matrix series?
The best places in Ireland for breakfast and brunch have been revealed
BBC will show an 'immensely powerful' documentary about The Troubles tonight
Man (40s) killed after walking in front of oncoming truck after driving into a ditch
You may also like
4 days ago
Gardaí warn of 'romance fraud' ahead of Valentine's Day
5 days ago
If your name is Mary, you can get free burgers in Dublin this Friday
1 week ago
Christmas FM is returning as Kissmas FM for one week only
2 weeks ago
First-time buyers of Dublin! Fancy watching Crazy, Stupid, Love with us?
1 year ago
WATCH: RTÉ asked people in the street to describe love, and it is incredible entertainment
1 year ago
13 cringe Valentine's Day posts you're going to see on Facebook today
Next Page