Following talks held at Sandringham, the Queen has issued a statement regarding the Duke and Duchess of Sussex.

A meeting involving the Queen Prince Charles, his two sons Prince William and Prince Harry and senior staff has resulted in the following statement from Queen Elizabeth II.

The 93-year-old has said that she would have preferred that the couple remain as full-time working members of the royal family but she understands their "wish to live a more independent life".

Below is her statement in full:

"Today my family had very constructive discussions on the future of my grandson and his family.

"My family and I are entirely supportive of Harry and Meghan’s desire to create a new life as a young family. Although we would have preferred them to remain full-time working Members of the Royal Family, we respect and understand their wish to live a more independent life as a family while remaining a valued part of my family.

"Harry and Meghan have made clear that they do not want to be reliant on public funds in their new lives.

"It has therefore been agreed that there will be a period of transition in which the Sussexes will spend time in Canada and the UK.

"These are complex matters for my family to resolve, and there is some more work to be done, but I have asked for final decisions to be reached in the coming days". 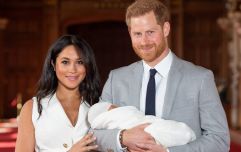 Mother and father give newborn child a name

END_OF_DOCUMENT_TOKEN_TO_BE_REPLACED

This is the latest development in what has been a tumultuous week for the royals, starting last Wednesday when Meghan Markle and Prince Harry announced their decision to stand down as senior royals.

They released a statement via their official Instagram account, a move that came as a shock to other members of the family, including the Queen.

You can read their full statement here.


popular
Here are Ireland’s favourite takeaways, as per the National Takeaway Awards
Here are the 6 best movies on TV this evening
QUIZ: Week 16 of JOE's 19 in 90 quickfire quiz is here
TG4 to air a documentary on Ireland's homeless crisis this evening
"Totally unacceptable." Final year students at WIT hit out after extra module added to final semester
Fine Gael and Fianna Fáil say Sinn Féin's rent-freeze proposal is unconstitutional. We asked a constitutional lawyer
Met Éireann forecasts risk of sleet and possibly snow in parts of Ireland this weekend
You may also like
3 days ago
Meghan Markle and Prince Harry to no longer use HRH titles as details of deal to split from royal family revealed
1 week ago
Queen to hold crisis talks over Prince Harry and Meghan announcement
1 week ago
Prince Harry and Meghan Markle are officially stepping down from their royal duties
3 months ago
Prince Harry issues powerful statement condemning the treatment of Meghan Markle by British media
7 months ago
Donald Trump denies calling Meghan Markle nasty, despite comments being recorded
8 months ago
BBC presenter fired over 'racist' tweet about Harry and Meghan's baby
Next Page