The average price differences between mortgage costs and rent costs are widening further than ever.

Daft.ie have released their quarterly report findings for the end of 2019, and discovered that rent prices fell by 0.1% in the first quarter of 2019. This marks the first time that rent prices have not risen quarter-on-quarter since mid-2012.

Additionally, the report found that Dublin rent prices are up 3.5% when compared to the same time in 2018, marking the lowest rate of increase in prices since 2008.

END_OF_DOCUMENT_TOKEN_TO_BE_REPLACED

However, as the national average monthly rent is now €1,402, which stands a full €659 per month higher than the most-recent low, seen in late 2011, and it proves that the renting market is still an expensive place to be. 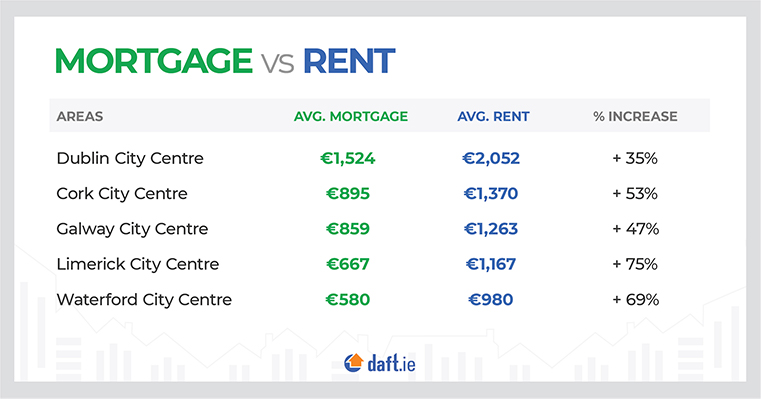 The average rents around the country, and year-on-year change, for the fourth quarter of 2019 is as follows:

END_OF_DOCUMENT_TOKEN_TO_BE_REPLACED

Ronan Lyons, an economist at Trinity College Dublin and author of the Daft Report, had the following to say about the findings:

"With the election of a new government, housing - and in particular the rental sector - are likely to be key parts of the new government’s priorities. Despite the desire for a quick fix, such as rent freezes, no such quick fix exists. By worsening insider-outsider dynamics, rent freezes are likely to further harm those most affected by the shortage of accommodation.

"And, if somehow applied to newly-built rental homes, rent controls could prove calamitous for a country that desperately needs new rental homes but has very high construction costs."

The full report can be found here.

popular
The Last Of Us Episode Five will premiere days earlier in Ireland and UK
One of the most underrated crime thrillers of recent years is among the movies on TV tonight
5 years ago, Hollywood took a massive gamble on a huge sequel... and lost big time
Shock as blues singer beats Adele, Beyonce and Taylor Swift to win Song of the Year Grammy
Amazon Prime Video has just added 21 big movies to its library
Ben Affleck's bored expression at the Grammys becomes a meme
The first reviews for Hogwarts Legacy are absolutely stellar
You may also like
1 week ago
Leo Varadkar says alleged assault on migrant camp in Dublin has the 'look of' a racist attack
1 week ago
This is what the cheapest house for sale in Dublin looks like
1 week ago
NTA publish €25bn plan for new Luas lines and Metrolink in Dublin
1 week ago
Three injured after fight breaks out at refugee centre in Dublin
2 weeks ago
Investigation launched after burglary at Hugo Boss store on Grafton Street
3 weeks ago
'Life changing' €1 millon lotto ticket sold in Dublin
Next Page