Some of Ireland's richest people have been revealed

Lifestyles of the rich and the famous.

If we had this much money floating around, we would have probably bought a football team by this stage.

RTÉ is doing a rich list show and has revealed to the Irish Mirror some of the candidates who are on the list from 30-16. 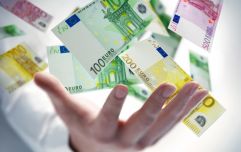 END_OF_DOCUMENT_TOKEN_TO_BE_REPLACED

The two part series will count down those at the top of the money tree in Ireland and they will also give the viewer an insight into what it takes to join the elite millionaire's club.

Niall Horan is one of the youngest and highest entertainers on the list with a fortune of €44 million at the tender age of 23.

Hozier is also on the list but is worth only 10% of Horan's fortune at €4.5 million while the wild-haired duo of Jedward come in at €1.5 million.

Irish golfer, Rory McIlroy comes out on top on the sports rich list at €96 million which is surprisingly ahead of Conor McGregor whose fortune stands at €82 million.

Shockingly enough, U2 are in the first half of the countdown as Bono and the boys have a combined wealth of €645 million.

It's the luck of the Irish, eh?


The Architects Of Business || JOE · "It doesn't get bigger than this for me" - Irish scientist wins EY Entrepreneur of the Year 2020
popular
QUIZ: Can you guess these European countries from their outlines?
QUIZ: Can you answer all the £1 million questions from Who Wants to be a Millionaire?
QUIZ: How well do you know Elf?
The JOE Movie Quiz: Week 79
Man arrested following the murder of a woman and two children at a house in south Dublin
Two Penneys stores to open for 24 hours next week
The JOE Friday Pub Quiz: Week 219
You may also like
1 week ago
EU to provide €2.5 billion to help cover costs of Covid-19 wage subsidy scheme in Ireland
1 month ago
The median annual household disposable income in Ireland was over €43,500 in 2019
1 month ago
Average house price reaches nearly €265,000 as prices rise in all 54 markets in Ireland
1 month ago
Budget 2021 - A brief guide to what you need to know
1 month ago
Minimum wage in Ireland to increase to €10.20 per hour from 1 January
2 months ago
Employees given option to pay tax bills resulting from Covid-19 wage subsidy schemes over four years
Next Page