The world's most badass turtle has somehow managed to survive being hit by a car after it was recently hurled through a car windscreen in Florida.

In a move that would make Leonardo, Michelangelo, Raphael and Donatello jealous, this unlucky turtle was projected through the windscreen of Florida motorist Nicole Marie Bjanes, but all parties involved in the incident were unscathed after the incident.

Speaking about the incident, Nicole had this to say " I am a lucky girl. All the people who stopped and the EMT and trooper were taking pics....unbelievable, and the guy at the hospital was laughing at how he should word the incident! Life is good and sometimes a little crazy....someone is keeping my on my toes and entertained. There was a turtle crossing I4, the car in to the left of me hit it and propelled it straight through the windshield".

Here's what we think the turtle was actually up to before the incident occurred. 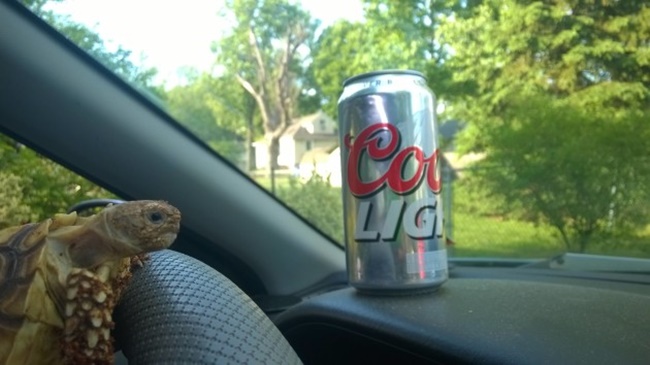 Once again, nobody was hurt and the EMT even managed to guide the turtle to safer pastures.

Here's a look at the damage that was caused..


popular
Here are the brand new TV shows you'll be addicted to in 2020
QUIZ: How well do you know Will Smith's movie career?
The JOE Friday Pub Quiz: Week 174
Met Éireann issue low temperature weather warning for 25 counties
Temperatures drop to -4 as weather warning is in place for 17 counties
QUIZ: How many of these Disney Channel TV shows can you name?
It looks like winter Love Island may soon be getting its first Irish contestant
You may also like
5 days ago
Trampolines and fallen trees affecting traffic all over Ireland due to Storm Brendan
1 week ago
Sale of new petrol and diesel cars set to be banned in Ireland after 2030
1 month ago
Irish car insurance premiums up 42% despite claims falling by 40% over last 10 years
1 month ago
Over 300 drivers arrested on suspicion of intoxicated driving in Ireland in the last two weeks
1 month ago
New system of penalty points and speeding fines to be considered by Cabinet
2 months ago
Motorists face €120 fine and three penalty points for dangerous overtaking of a cyclist
Next Page