The official translation of the ISL national anthem was launched in July.

RTÉ has announced that they will simulcast an Irish Sign Language (ISL) signing of the National Anthem at Sunday’s All-Ireland Senior Football Final in full on RTÉ News Now in advance of the 3.30pm throw-in.

They also announced that the on-pitch ISL signing of the National Anthem will also be reflected in RTÉ’s live pre-match coverage on RTÉ2. 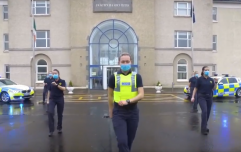 END_OF_DOCUMENT_TOKEN_TO_BE_REPLACED

This was conveyed by RTÉ at a meeting with the Irish Deaf Society on Thursday afternoon.

It follows a series of protests scheduled for outside various RTÉ buildings across the country. Irish deaf communities claimed that the national broadcaster has misrepresented ISL on televised events such as the All-Ireland Hurling Final and the Papal mass.

ISL – which got legal recognition last Christmas Eve – is now officially the third language of Ireland.

In a statement released by RTÉ, the national broadcaster says that they aim to "reflect the occasion in its totality" when filming the national anthem before sporting occasions.

"When covering the National Anthem, a central part of the build-up to a major event like the GAA All-Ireland Final, RTÉ seeks to reflect the occasion in its totality to our entire audience, by capturing a range of images, of the President, An Taoiseach, both sets of supporters, both sets of players and their management teams, the stadium (including aerial images), the band, the referee and match officials, as well as the ISL signer provided by the GAA.

"The arrangements now in place will ensure that viewers who wish to watch ISL signing of the National Anthem in full, throughout its two-minute duration, are accommodated.

"RTÉ will also promote this addition to its coverage across its services in advance of Sunday’s live broadcast."