It isn't until November, but we imagine they'll sell out pretty quickly.

In a day that most fans would probably rather forget, Denmark destroyed Ireland's World Cup hopes when they defeated us 5-1 back in November 2017. 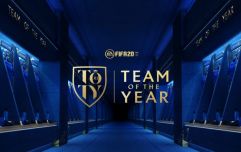 END_OF_DOCUMENT_TOKEN_TO_BE_REPLACED

However, there will be a chance for a bit of revenge, thanks to Ireland’s UEFA Nations League match with Denmark on Monday 19 November this year.

Due to phenomenal demand, the good folks at Ryanair are putting on extra flights for fans who might want to head over the Denmark at support the boys in green in person.

The departing flight with leave Dublin on Monday 19 November at 9.40 am, giving loads of time to get to the match in Copenhagen that evening at 8.45pm, and then the return flight leaves Aarhus on Tuesday 20 November 3.15pm, leaving enough time for those who might be a little fragile after a night of celebrations to sleep it off.

Ryanir's Head Of Communications Robin Kiely said: "The World Cup is in full swing and Ireland fans still getting over the defeat to Denmark can look forward to a chance for revenge in November. We’ve scheduled return flights to Aarhus for Ireland’s Nations League match with the Danes in November."

Seats are on sale right now on the Ryanair website.

The Big Reviewski || JOE · TBR Spotlight: The Falcon and the Winter Soldier Episode Four - 'The Whole World is Watching'
popular
The JOE Movie Quiz: Week 97
The JOE Friday Pub Quiz: Week 238
The 50 most iconic songs of all time* have been revealed
The Falcon and the Winter Soldier is on the precipice of dealing with an incredibly sensitive topic
Thunder Force review: somebody needs to stop letting Melissa McCarthy's husband make movies
Reeling in the Years: How the 2010s are different to any other decade
The JOE Music Quiz: Week 52
You may also like
1 week ago
Martin Compston reveals moment he delayed Line of Duty filming to watch Scotland penalty shoot-out
1 month ago
EA Sports bans Irish FIFA player who racially abused Ian Wright for life
1 month ago
TOWIE star Mark Wright is officially the worst player on FIFA 21
2 months ago
Jamie Carragher reacts to hilarious TikTok remix combining on-air yelp with John Legend song
2 months ago
Roy Keane reacts to the dancing Keano FIFA TikTok meme
2 months ago
Watch the official trailer for Netflix's hotly anticipated Pelé documentary
Next Page