Fans of the game have been waiting for this day.

No, it isn't the official addition of the word "Kwyjibo"...

Maybe one day, but not today...

No, instead it does involve the addition of a new playable word.

As of today, the letters O and K are acceptable as a combined word, when it was previously only allowed to be spelled out "OKAY". 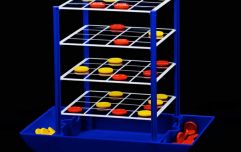 40 years after creating it, an Irishman is on the verge of bringing out an innovative boardgame

END_OF_DOCUMENT_TOKEN_TO_BE_REPLACED

It is one of a series of new additions made this week by Merriam-Webster for the official Scrabble dictionary.

Yep. Ew is now officially a playable word on Scrabble.

Let it never be said that Scrabble doesn't reflect the language!

popular
QUIZ: How many of these characters from The Simpsons can you name?
Two children, aged 3 and 4, hospitalised after consuming suspected cannabis jellies
Australian woman stuck with Irish accent after tonsil surgery
The 50 most iconic songs of all time* have been revealed
Alastair Campbell accidentally announces death of The Queen live on GMB
Assassin's Creed director on why Ireland is the perfect setting for their new game
PICS: The man with the biggest penis in the world has one unbelievable problem with it
You may also like
3 years ago
Turns out we've been playing Monopoly incorrectly for our entire lives
1 month ago
First-time buyers in Galway: This virtual First-Time Buyers Masterclass will kickstart your mortgage
1 month ago
The 10 best beaches in Ireland, as named by Lonely Planet
1 month ago
First-time buyers in Dublin: This virtual First-Time Buyers Masterclass will kickstart your mortgage
1 month ago
Aldi's outdoor hot tubs to return to shops this weekend
1 month ago
Richard Branson is renting out his second private island
Next Page