PIC: The photo of the summer? Shane Ross pictured cradling a can of Dutch Gold at the Luas

Well, you're not alone. It seems that everyone is in a bag of cans kind of mood today, even government ministers. 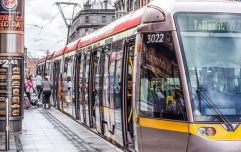 END_OF_DOCUMENT_TOKEN_TO_BE_REPLACED

Dublin North West TD Noel Rock is down at the testing of the new Luas Cross City line, which have been ongoing all day on Saturday.

Of course, to witness the day the new Luas line gets its first run out, Minister for Transport, Tourism and Sport, Shane Ross is also in attendance at the testing.

Now, it wouldn't be a day in the Irish sun without somebody being in possession a can and it seems that man is Shane Ross.

Noel Rock tweeted a photo that will surely be played on Reeling in the Years in time to come.

It is a day for it to be fair. Bag of cans on the tram. pic.twitter.com/FiCL46S1VV

END_OF_DOCUMENT_TOKEN_TO_BE_REPLACED

But of course, Shane Ross is well aware of the rules regarding drinking in a public, with an open container of alcohol generally classified as public drinking.

Ross didn't bring the can himself, it was presented to him by one of the workers on the Luas line to celebrate linking the north and the south of Dublin, and rather than risking a nasty fine and setting a bad example, Ross didn't open his beverage in public.

What he did with the can when he left might be a different story though...*

*This is all speculation at this  point

House of Rugby Ireland · Munster can't beat Leinster, Six Nations squad and John Cooney interview
popular
Holly Willoughby criticises influencer for travelling to Dubai during pandemic
QUIZ: Can you name all of these countries just from one of their cities?
Vials of Covid vaccine in Louth and Meath area dumped as they weren't stored properly
Here are the best movies on TV tonight
90 further Covid deaths confirmed, 928 new cases
New Zealand set to close its borders for the entirety of 2021
Leo Varadkar says if Ireland introduced mandatory hotel quarantine, it would have to do so for a year
You may also like
2 months ago
Gardaí appeal for witnesses to “unruly and offensive behaviour” by individuals not wearing face coverings on the Luas
2 months ago
Luas report anti-mask group to Gardaí
5 months ago
Four new stops to be added to Luas green line with Luas Finglas extension
9 months ago
Red Line Luas collides with truck in Dublin
1 year ago
Over 2,927 drivers clamped at Red Cow Luas Park & Ride in 2019
1 year ago
Luas to extend further into North Dublin as part of new plans
Next Page