The alternative title of Grinding Nemo makes more sense than ever.

Congratulations to The Shape Of Water on winning four Oscars this year, including those for Best Picture and Best Director, but we feel that in years to come, this will not be the major talking point of the movie's success.

The movie, which was produced for reportedly as little as $15 million, and at the time of writing has made over $125 million at the global box office, could certainly measure its success in those terms, but it is becoming more and more clear that the primary way to judge if a movie is a cultural hit is... well... how do we put this?

The movie's director Guillermo Del Toro has been made aware of these, and referred to them as "inaccurate" and "fan-fiction", while telling The Wrap that "I'm sure Dunkirk doesn't have this problem." 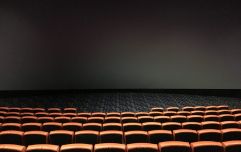 END_OF_DOCUMENT_TOKEN_TO_BE_REPLACED

Additionally, Doug Jones - the actor on whom the fish-man appendage is, uhm, based? - added "After pouring my heart, soul, blood, sweat, and tears into this romantic, beautiful, magical role, the last thing I want to be remembered for is a silicone appendage that comes in two sizes."

popular
QUIZ: How well do you really know Irish weather?
25 years ago, Sylvester Stallone delivered his best performance in a hard-hitting crime drama
QUIZ: You'll do well to get 100% in this General Knowledge Quiz
Disney+ has just added 10 big movies to its library
Dublin Airport reduces the recommended arrival times for passengers
Why Bran Stark is the true villain of Game of Thrones
QUIZ: Can you get 10/10 in this Irish sayings quiz?
You may also like
3 days ago
Joker sequel reportedly to cost three times as much as the original
3 days ago
Event Horizon is the horror movie that proves that sometimes film critics get it very wrong
4 days ago
The new Love Island and 8 more new movies & shows to watch this weekend
1 week ago
Two long-thought-dead Marvel projects appear to be in the works
1 week ago
Nope has the best scary scene in 2022 so far
1 week ago
All the new releases coming to Netflix, Prime Video, Disney+ and cinemas in August
Next Page