This week, JOE's business and money columnist Simon Moynihan looks at whether it might be time to look at fixed term deposits, and how to spot the best deals.

We all know that most of our banks are broke and desperate for deposits. They’ll take anything we’ve got, but the deposits they covet most of all are fixed terms. These are the accounts where you agree to lock your money away for a set period of time in return for a higher rate of interest, and Irish banks are now hawking these products with great enthusiasm.

Term deposits are a pretty good indicator of a population’s faith in its banking system. If people think everything’s hunky-dory, and believe that the banks will still be there in ten years, they’ll happily open accounts that lock their cash away for 18 months, two years, or heck, maybe even five years. If people don’t have faith in the banking system, they keep their cash where they can get their hands on it… quickly. 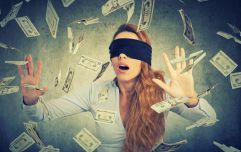 END_OF_DOCUMENT_TOKEN_TO_BE_REPLACED

Unsurprisingly, the amount of money in term deposit accounts has been falling steadily over the last couple of years, and September 2008 was the big month when it all began to go pear-shaped. Back then Anglo was hemorrhaging a billion a day to international investors, the deposit guarantee was increased to €100,000, the banks took their begging bowls to the Government on 29 September and the infamous blanket guarantee was issued on 30 September. Thus began the “cheapest bailout in history.”

Then, in September 2008, people stopped putting their money into term accounts and the slide began. By November 2010, the amount of money we had in these accounts had fallen back down to €62 billion. On a chart it looks like a perfect pyramid that peaks in September 2008. 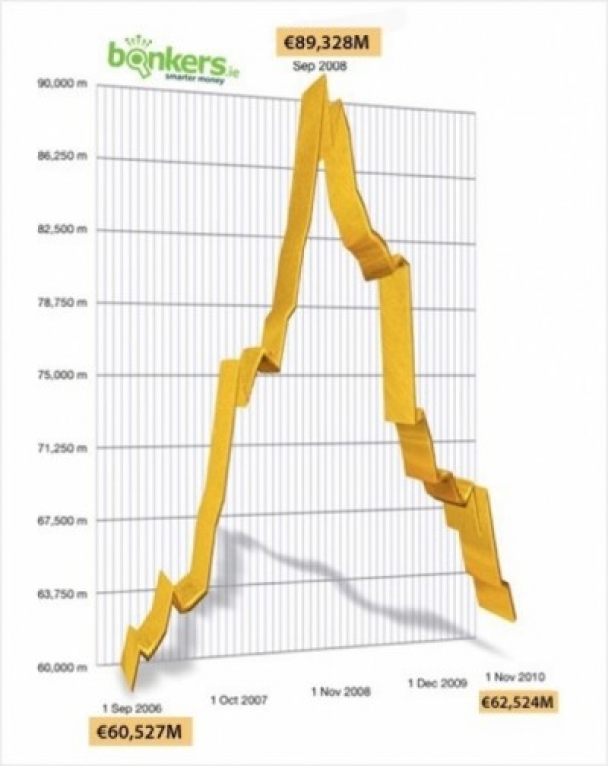 The steady flow of cash out of term accounts showed that people had less than total faith in the banks and even less in the Government. Despite the guarantees, people wanted their money where they could get at it quickly and as terms matured, customers moved their money into demand and notice accounts rather than rolling over into new terms.

So now the banks are trying to persuade us to put our money back into these kinds of accounts with slick advertising, shiny new accounts and sparkly interest rates. Whether we’ll be encouraged to lock away our cash is yet to be seen, but the accounts are worth a look all the same. 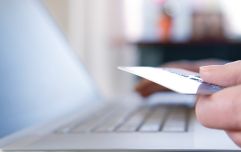 END_OF_DOCUMENT_TOKEN_TO_BE_REPLACED

When advertising any kind of savings account, banks have to publish what’s called the Annual Equivalent Rate or AER. It’s odd that banks should be required to show the actual yearly interest rate for a savings account so as not to confuse consumers, but there you go.

Term accounts are a bit different from standard savings accounts. The terms can be anything from a couple of months to 10 years and when they have terms of more than a year, banks love to advertise the term rate in huge numbers and keep the AER in the small print.

There are loads of examples of this but since Bank of Ireland brought out some new term accounts this month, it’s worth taking a look at them first. They have a new 18-month account and a new 15-month account. With both, they lead with the amount of interest you’d earn by the end of the term. Their promotional copy looks like this: 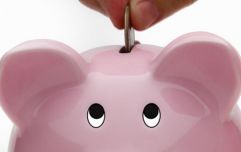 END_OF_DOCUMENT_TOKEN_TO_BE_REPLACED

For both of these accounts, the end of term rate is in huge numbers and the AER is of course in tiny type.

Conversely, Bank of Ireland has a new six-month term account which is advertised as having a:

Fantastic rate of 3.43 per cent EAR

The return is actually 1.7 per cent but of course, Bank of Ireland doesn’t lead with that when it can use the higher AER figure.

With these three accounts, it looks like the 18-month will earn the most interest, right? Well, it won’t. The account with the best return is actually the six-month, followed by the 15-month and the lowest yielding account is the 18-month. So, Bank of Ireland is turning the concept of the term account upside-down and paying out the highest rate to the shortest term.

Despite the way these kinds of accounts are being advertised, they all represent big increases in how much the banks are prepared to pay us for our money. The six-month Bank of Ireland account is the best six-month term in the market, and EBS has a one-year term, that at 3.5 per cent AER, is only matched by Anglo and Irish Nationwide – hardly the banks of choice for the nervous saver.

It will be interesting to see if customers come back to saving their money in term accounts and whether this push by the banks stops the slide. With so much uncertainty, it’s pretty unlikely… unless the population suddenly develops guts of steel.

The Big Reviewski || JOE · TBR Spotlight: Loki - Episode Two - 'The Variant'
popular
QUIZ: Can you name all these European countries from a list of cities?
The Queen appealing for volunteers to weed the garden of her Sandringham Estate
The 50 most iconic songs of all time* have been revealed
PICS: The man with the biggest penis in the world has one unbelievable problem with it
QUIZ: Can you get full marks in this potentially very frustrating general knowledge quiz?
The JOE Movie Quiz: Week 107
People think they've figured out the ranking of the viewers on your Instagram Stories
You may also like
5 years ago
The 10 commandments of looking for a mortgage
9 years ago
No more mortgage increases
9 years ago
The Keane Report on distressed mortgages - the bullet point version
9 years ago
Look away now: More bad news as mortgage interest rates rise
10 years ago
Sell your crap, pay off your debt, do what you love
10 years ago
Four easy steps to cheaper car insurance
Next Page