Someone in Ireland is €500,000 richer thanks to Friday night's Euromillions draw

We know what part of the country the winning ticket was sold in! 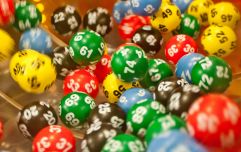 END_OF_DOCUMENT_TOKEN_TO_BE_REPLACED

Now the good news, because nobody else won it, either.

The biggest Irish winners of that draw were the two people who matched four numbers and the two bonus numbers, and they've each won €3,865, which is 100% not to be sniffed at.

However, Ireland's big winner did walk away with half a million euros thanks to the Euromillions Plus draw.

The winning ticket was sold in the Midlands, so if you bought your ticket in that area, get checking ASAP!

popular
People want "offensive" Crown Paints advert banned after attracting hundreds of complaints
Netflix has just added 23 very big movies to its library
Disney+ has just added 10 big movies to its library
Human remains found in suitcases are the bodies of two children
A terrific '90s crime drama is among the movies on TV tonight
The 50 most iconic songs of all time* have been revealed
Why Bran Stark is the true villain of Game of Thrones
You may also like
1 month ago
"Multiple overnight millionaires" teased for Tuesday night's EuroMillions draw
1 month ago
County where winning Lotto jackpot ticket worth over €5.5 million was sold confirmed
6 months ago
Shop where winning Euromillions ticket was sold revealed
6 months ago
‘You’ve won big!’ - Irish family reveal the moment they knew they’d won €19 million Lotto jackpot
6 months ago
Shop where winning Lotto jackpot ticket was sold revealed
7 months ago
Here's where all the 149 tickets that won €36,687 in Saturday's Lotto were sold
Next Page