We've got a long weekend coming up!

Well lads, the May Bank Holiday is here, so you've got an entire extra day to fill up before you've got to return to work on Tuesday.

We're here to help you out with a small selection of things for you to do with your weekend that don't involve you staying up until 2am on Monday morning to watch Game of Thrones.

There'll also be matchmaking (of course) with world famous local matchmaker Willie Daly. An All Priests and Nuns Karaoke and Fancy Dress contest, and the grand finale of a lovely Girls contest followed by DJ Frankie Fortune 'til late, with entries for Lovely Girls contest welcome up to 9pm. 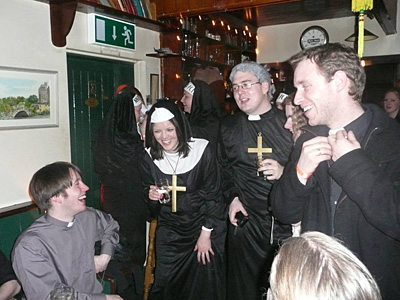 It's a very special year for the Bray International Jazz Festival, as acts from around the globe travel to Wicklow to perform in its 20th anniversary event. It's been named "One of the very best small jazz festivals in Europe” by All About Jazz, and ”the connoisseur’s jazz festival” by the Irish Times.

Clip via Jazz Night in America

The Connemara Mussel Festival has been voted Voted No. 1 Best Irish Seafood Festival by Coast Monkey.

There will be free-to-attend food events in the Festival Marquee, as well as theatre, music and a Leonard Cohen tribute from Sophia Ammann.

There'll also be a Great Pub Restaurant Bake-Off for local pubs. Guaranteed to make you hungry.

With Noel and Liam no closer to patching up their many differences, Definitely Oasis might be the closest you get to seeing Oasis in the flesh any time soon.

The tribute act are absolutely spot on, and at just under €16, tickets to see these lads in the Button Factory on Saturday is a steal.

May The 4th Be With You, all over Ireland

In honour of Star Wars day aka May The 4th Be With You, there will be Star Wars-themed events going on all across Ireland this weekend.

From 3 May to 5 May, different events will be happening across the country, including a Star Wars parade and Star Wars VR experience in Valentia.

There'll also be a live recording of the Full of Sith podcast: the most-listened to Star Wars podcast in the world. That'll be going down in Ceann Sibéal Hotel in Ballyferriter, Co. Kerry.


popular
QUIZ: How well do you remember these classic PS2 games?
Donald Trump takes aim at Parasite's Oscar win because the movie is from South Korea
Here are all the best new titles coming to Netflix in March
New weather warning issued for three counties
Laura Whitmore hits out at paparazzi photographing her following Caroline Flack's death
Mary Lou McDonald wins most votes, but no Taoiseach elected after first sitting of 33rd Dáil
Gardaí search for owner of "quantity of gold Krugerrands" in Limerick
You may also like
1 week ago
Gardaí rescue man from icy waters in canal in Galway
2 weeks ago
Gardaí identify body of man found dead in Galway in 2014
1 month ago
Gardaí seize over €175,000 in cash and €50,000 worth of cocaine in Galway
1 month ago
Two men arrested following spate of business robberies in Limerick and Tipperary
1 month ago
Galway County Council warns of "astronomical tides" as Storm Brendan approaches
1 month ago
€140,000 of suspected heroin seized in Galway
Next Page