When the Sith meets his fans.

In the event that you're the only person in the world that hasn't seen Star Wars: The Force Awakens, consider this to be a spoiler alert warning that's louder than the destruction that the Death Star inflicted on Alderaan.

Still with us or did you journey to the Dark Side?

END_OF_DOCUMENT_TOKEN_TO_BE_REPLACED

As you could imagine, Kylo Ren must have a lot of pent-up aggression that he needs to burn off, we imagine that patricide can be a stressful thing. All this without even mentioning the fact that Supreme Leader Snoke is probably putting him through some Sith training as we speak.

Right now, the actor is filming in Kerry and it seems that his performance in Episode VIII will require him to be in decent shape.

Shane Finn is the owner of the WK Fitness and he had the Star Wars actor in his gym recently. Shane was chatting on Breakfast Republic and it appears that actor made a very strong impression with the locals.

END_OF_DOCUMENT_TOKEN_TO_BE_REPLACED

Shane says that Driver was "one of the nicest guys I've had in here" and that some "American students nearly fell over with excitement" after they saw him.

Every morning, before leaving the gym, the Star Wars actor would shake hands with the entire staff and ask for recommendations on what's good to do/see/eat in the area.

Driver even gave the gym owners a signed t-shirt as a gift. 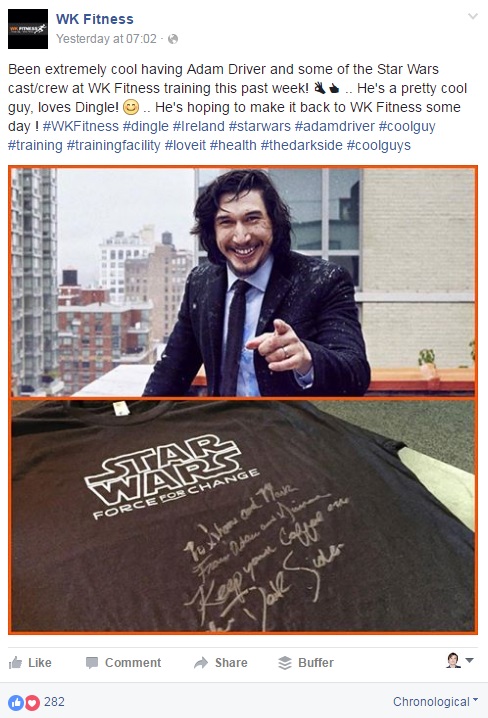 If you're jealous that Star Wars is currently in Kerry then the following information won't help you, some of the people in the area actually ended up meeting the cast in Dick Mac's pub.

popular
Netflix has just added an incredibly tense 97-minute thriller
Prime Video has just added 25 very big movies to its library
Stunning Mayo beach named the best place to swim in Ireland and the UK
The Ultimate "That Actor From That Thing" Quiz
QUIZ: Can you name all the counties in Ireland with an ‘N’ in their name?
The 50 most iconic songs of all time* have been revealed
18 counties hit with weather warning as temperatures set to reach 29 degrees
You may also like
9 hours ago
WATCH: House of Hammer details the alleged crimes of award-winning actor Armie Hammer
12 hours ago
Prime Video has just added 25 very big movies to its library
1 day ago
5 must-watch shows and movies streaming on NOW in August
2 days ago
Two long-thought-dead Marvel projects appear to be in the works
5 days ago
This new true-life disaster show is being called one of the grimmest, bleakest shows ever made
5 days ago
All the new releases coming to Netflix, Prime Video, Disney+ and cinemas in August
Next Page