Study shows that the eldest sibling is the smartest

While some say that the youngest gets the most attention, this isn't factually accurate according to a new study conducted by the University of Edinburgh.

The study found that first-born children are smarter than their young siblings as authors of the study set out to find out more about the "birth order effect". 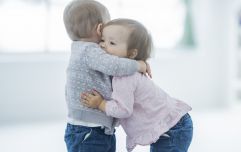 END_OF_DOCUMENT_TOKEN_TO_BE_REPLACED

Researchers say the findings could help to explain the so-called birth order effect when children born earlier in a family enjoy better wages and more education in later life.

For the study, researchers followed 5,000 children from pre-birth to the age of 14 and tested them every two years with reading, letter-matching, and picture vocabulary.

Results showed that first-born children exhibited higher IQ scores than their younger siblings by the age of one.

The results showed that advantages enjoyed by first born siblings start very early in life, from just after birth to until after three years of age.

The differences increased slightly with age, and showed up in test scores that measured verbal, reading, math and comprehension abilities.

So there you have it folks, if you're the youngest and the least successful in your family, it's not your fault, it's your parents.

popular
Dr Ronan Glynn says there will likely be no need for vaccine passports by June
Japan to release one million tonnes of contaminated Fukushima water into the sea
Hank Azaria feels he needs to apologise "to every single Indian" for playing Apu in The Simpsons
Taoiseach Micheál Martin says hotels across Ireland could reopen by June
Three-year-old girl dies after being struck by a bus in Tipperary
Dr Ronan Glynn says six more weeks of strict restrictions needed to prevent fourth wave
Steven Avery's lawyer says nephew Bobby Dassey planted evidence in case
You may also like
2 years ago
These traditional baby names are set to become 'extinct' in Ireland because parents won't use them
2 years ago
11 savage texts it's perfectly acceptable to send to your siblings
2 years ago
New poll reveals the most unpopular baby names for 2018
2 years ago
Teenagers more interested in phones and family than having sex, according to a new study
2 years ago
Irish girl with cerebral palsy needs to travel abroad for life-changing surgery
2 years ago
Parents take 30-year-old son to court to get him to move out of the house
Next Page