Pigs in blankets might not be as well-known a delicacy in Ireland as they are elsewhere, but you may well be aware of the dish, essentially sausages wrapped in crispy bacon that come out the oven.

Sometimes, nothing beats pork wrapped in even more pork. 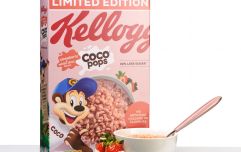 END_OF_DOCUMENT_TOKEN_TO_BE_REPLACED

Subway clearly concur with this factual statement, looking at their Christmas menu, which has today been unveiled.

The headline act of this menu is a pigs in blankets sub on tiger bread - also a new addition to the store. It is available in both six-inch and footlong sizes.

The sandwich comes drizzled in a southwest sauce and is fully customisable as a wrap or a salad. Though, I'm not sure why anyone would want to ruin pigs in blankets with green leaves, but each to their own.

On the sweeter side of things, the Chocolate Orange Cookie and Mince Pie Cookie have both returned by popular demand, as well as the Honeycomb Coffee and Hot Chocolate.

Subway's festive menu launches on Wednesday this week (11 November), and will be available for delivery or pick-up until the end of December.

House of Rugby Ireland · Murray & Sexton debate, France's Covid hell and James Tracy interview
popular
The JOE Friday Pub Quiz: Week 232
Scarlett Moffatt discovers ‘30% rain’ on weather app doesn’t mean chance of rain
Irish cinema named one of the 50 most beautiful cinemas in the world
Rick and Morty creator reacts to dropping one of the first f-bombs on Disney+
QUIZ: Can you name all of these characters from The Rugrats?
These are the free subscription games coming to PlayStation and Xbox in March
The 50 most iconic songs of all time* have been revealed
You may also like
1 week ago
Camile Thai to create 220 new jobs in Ireland and open 15 new outlets
1 month ago
31 closure orders and 9 prohibition orders served on Irish food businesses in 2020
1 month ago
McDonald’s to keep drive-thrus open and maintain delivery service during lockdown
2 months ago
The perfect turkey curry recipe to try this Christmas
2 months ago
A new Krispy Kreme store is set to up in Dublin city centre
3 months ago
REVEALED: The winners of all 28 categories in the 2020 Just Eat National Takeaway Awards
Next Page