It's a strange one.

Some people take forever to get that tattoo they always wanted. They plan for months and months, going through the different versions of what they want to get.

Then, there is the other set of tattooers who just rock up to get inked in a spur of the moment sort of scenario and don't question their choice. 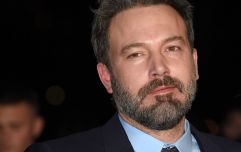 PICS: Folks are having a hard time dealing with Ben Affleck's rather large and intense back tattoo

END_OF_DOCUMENT_TOKEN_TO_BE_REPLACED

However, a study has documented how changes in sweating functions can be associated with tattooing and this can pose serious health risks for those who are heavily tattooed.

The tattooing process involves permanently depositing ink under the skin at a similar depth as the sweat glands, Alma College’s Maurie Luetkemeier and two students posed the question: Does possessing a tattoo interfere with the basic functions of the sweat gland?

They conducted a study involving ten students who had tattoos on one side of their upper body but not the other and a group of ten non-tattooed people.

Luetkemier was worried about the findings and said that: “future research may address the ultimate question whether or not heavily tattooed individuals are at risk of heat-related injuries.”

Why is he worried? Well, sweating helps your body maintain a proper temperature and keeps you from overheating and if this is tampered with, it could signal serious risks for your health

Advertisement
House of Rugby Ireland · Quinn Roux on finding a home in Ireland and Mike McCarthy brings the absolute HEAT!
popular
CONFIRMED: Level 5 restrictions to remain in place until 5 March
Leo Varadkar says if Ireland introduced mandatory hotel quarantine, it would have to do so for a year
QUIZ: Can you name all of these countries just from one of their cities?
Man arrested for fishing envelopes out of church collection boxes in Cork
Police called to illegal rave to find pensioners queuing for vaccine
Majority of English people 'pleased' or 'not bothered' by prospect of united Ireland
The JOE Movie Quiz: Week 86
You may also like
2 years ago
Emma Watson's blunt response to anyone who criticised her Oscars tattoo
3 years ago
People with tattoos being warned over cancer-like symptoms developing after discovery
3 years ago
An Irish tattoo artist is doing something remarkable by inking for free to cover up self-harm scars
3 years ago
PIC: An Irish woman living in Australia has gotten a very Irish tattoo
3 years ago
PIC: This Conor McGregor fan might live to regret getting this tattoo come next month
3 years ago
PICS: Two Irish men mark the end of Enda Kenny's reign as Taoiseach with a unique tattoo
Next Page