These are the ten most expensive homes in the world, and the people who own them

The number one spot has 78 bathrooms. Which is overkill, if you ask us...

You might think, what with the way the current housing market is, that a 3-bedroom in Dalkey would probably be somewhere on this list.

We can't say for certain that it didn't wind up at #11, but it definitely isn't in the Top 10 most expensive homes (which automatically discounts palaces, which are a different thing) on the entire planet. 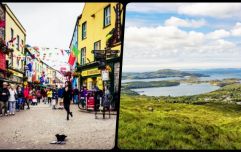 4 things to see and do in Galway this weekend

END_OF_DOCUMENT_TOKEN_TO_BE_REPLACED

According to CompareCamp.com, these are those homes, along with their price-tags, and who currently owns them.

We're gonna go out on a limb here and say none of these will be popping up on an AirBnb any time soon...

Owner: Larry Ellison, who Forbes Magazine announced was the world's 3rd richest man (albeit back in 2013)

Owner: Lily Safra, a Brazilian philanthropist and widow of  billionaire Lebanese banker William Safra. Fun fact, movie fans - this is the house Hitchcock filmed To Catch A Thief in back in 1955.

Owner: Mukesh Ambani, India’s richest man, with a net worth of $23.6 billion

Owner: Yes, it does count as a house, and it currently belongs to Queen Elizabeth II

The Big Reviewski || JOE · The Big Reviewski with Dune, a mini-Hangover reunion & the best of Timothée Chalamet
popular
WhatsApp to stop working on 53 phone models, including iPhone 6
Waterford driver fined for speeding, immediately speeds away, is fined again
FREE NOW reports "200 requests a minute" on Sunday following nightclubs reopening
Paschal Donohoe confronted on the street by anti-vaccine protestors
Three Status Yellow warnings issued as rain set to hammer the country
You can now get paid to watch Netflix and nap
Nightlife sector asks for two-week grace period on implementing guidelines
You may also like
1 week ago
5 of the best 2021 movies and shows on Disney+ you might have missed
1 month ago
COMPETITION: WIN €500 to spend on food and drink in your local bar
1 month ago
The JOE Friday Pub Quiz: Week 258
3 months ago
Spanish town offering free houses and jobs to entice people to move there
3 months ago
QUIZ: Can you get 10/10 in this quick County Cork quiz?
4 months ago
This amazing Cocktail Village is the hottest place to be this summer, here's everything you need to know
Next Page