The correct and definitive ranking of breakfast cereals

What will win when it comes to the crunch?

Well well, it's National Cereal Day... in America, at least.

On that note, it's time to present the definitive ranking of breakfast cereals.

25 in total, and some tough decisions along the way.

If I wanted a mouthful of unprocessed wheat for breakfast, I'd run through a field with my mouth open. Tolerable only with several spoonfuls of sugar and a stiff drink.

You only eat Corn Flakes when there's absolutely no other option, and in this age of ultra-consumerism, there's always another option. Goes soggy too quickly and a total taste vacuum, and as if anyone eats Corn Flakes with strawberries. 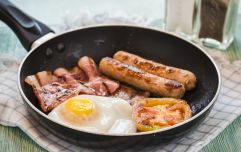 END_OF_DOCUMENT_TOKEN_TO_BE_REPLACED

Chocolate cereal is fine, but this is just chocolate pretending to be cereal - the cereal is an arbitrary addition to stop overzealous mams from rioting in Tesco. This is neither appropriate for kids (tooth rot) or adults (utter shame) to have for breakfast. It's not cereal, don't even try to pretend.

Getting up is hard enough, no need to make it worse by choking down a handful of raisins and nuts like some kind of depressed business squirrel. Muesli is bad for national resolve. Fuck muesli.

The trade-off between efficient bowels and things that taste nice comes to a head in Bran Flakes. They're good for poopin', but probably intended for dogs originally - only you can decide which matters more.

Tasty, but Curiously Cinnamon is a bullshit name - bring back Cinnamon Grahams and we'll talk.

As tasteless as they are, no one can deny the satisfying snip, cruckle and pap of Rice Krispies. When it comes to audio gimmicks, no other cereal comes close. Again, completely tasteless, but wait, listen - it's doing it again!

There's 5% less wheat in Weetabix than Shredded Wheat - is that really the margin of excellence here? If Shredded Wheat sacrificed just a few percent to get just a little sugar and salt in there, they might not be languishing in last place. Weetabix also holds the distinction of being the only cereal that's still sorta good when completely soggy.

Golden Nuggets are really good for about 30 seconds. Exactly 31 seconds after adding the milk, it all gloops together into sugary marshland, but for that glorious half of a minute, Golden Nuggets are about as good as little yellow balls can get.

Of all the 'healthy' cereals, Special K is the best. Like a tastier Corn Flakes, Special K has the added benefit of coming in different flavours - yoghurt, berries, pilates, mindfulness, etc. The downside is that you do look a bit of a wanker with a box of it in your basket, but balance it out with a few cans of mid-strength lager and you'll be fine.

Solid, a solid cereal. You might be disappointed to open the cupboard and only find Shreddies, but once you tuck into them you'll find yourself thinking, "Okay, maybe I won't drink the bleach today. Thank you, Shreddies. You saved a life today."

Corn Flakes' sugary and superior cousin - the star quarterback to the vitamin D-deficient cousin. Look at Tony, Tony knows what's up. He knows how good this shit is: "Theyyyyyyyyy're great!" he roars, correctly. Frosties are the minimum standard for good cereals; you have to be at least as good as Frosties to compete at this level.

We had a crack at Krave and Cookie Crunch for being confectionery masquerading as cereal, so what gives Lucky Charms the right to take such a high place in the rankings? Because no other cereal has a sugar level high enough to enable you to see in six dimensions. Should be illegal, thrilled it's not.

How can you improve on Shreddies? Cover them in sugar frosting.

It's a no-brainer, everything is improved with sugar frosting: doughnuts, hot dogs, Christmas, morning sex, tax rebates. Shreddies are no different. With the simple addition of sugar (who knew?) Shreddies have been elevated from an okay cereal to a Top 10 contender.

It turns the milk chocolatey, alright? That's fucking magic as far as breakfast is concerned. You get the cocoa crunch of the mouthfuls of toasted rice, then you get the bonus pleasure of slurping up the chocolatey milk afterwards. Other cereals turn the milk chocolateish, but only Coco Pops turns it chocolatey, and you're a ten-tonne fool if you think there isn't a difference.

An odd choice to kick off the Top Five, you might think, considering that Frosted Wheat's big brother Shredded Wheat occupies the bottom spot in this list, but making Shredded Wheat smaller and spraying frosting all over its face really works wonders. There's something special about the way the sugar dissolves in the milk, or that moment when you get an extra crunchy piece. It's just magical.

It's true: Crunchy Nut are just Frosties for wankers, and as is unfortunately often the case, wankers have excellent taste. Crunchy Nut is a smug-as-fuck cereal, but it's got something to be smug about. Crunchy Nut Cornflakes are the James Cameron of cereals: you probably wouldn't want to hang out with them, but fuck, Terminator 2 kicks ass.

Yes, my friends, Coco Pops have been usurped by a rabbit who basically hasn't changed since the '90s. It was a tough choice, but there's something just so satisfying about the crunch of Nesquik that you simply can't get from Coco Pops. It's a hearty cereal, bursting with vitamin Choc and everything that is bad for you. Delicious.

"Ricicles are twice as nicicles" - a ridiculous slogan for a top-drawer cereal. You don't have to have big, bold, complex flavours to make something nut-rattlingly delicious, as Ricicles prove. When you get right down to it, they're just sugary Rice Krispies, but there's something more to them, something intangible.

I also used to look like the Ricicles kid, not that that has anything to do with it.

The news that they're being discontinued is almost too much to bear.

Ladies and gentlemen: the perfect cereal. Specifically the chocolate chip version, but the fruit ones are still pretty damn good. Every single bit of this cereal is a dream. It has the right texture, the right consistency, and this shit does not go soggy for ages.

It's all a matter of surface area and density - one unit of Weetabix Crispy Minis is significantly larger than one unit of most other cereals, thereby taking longer to absorb milk to the point of critical sogginess. Weetabix are the masters of combating cereal sog, and with Crispy Minis they've perfected delicious, non-soggy cereal.

This is a glorious cereal. The greatest of all time. All other cereals should just give up. It's over. Go home. Go home and have a bowl of Weetabix Crispy Minis.

popular
Katherine Ryan says famous TV star is a ‘predator’ and everyone in industry knows
Very popular US fast food chain planning to open in Ireland
20 years ago, one of the best sci-fi movies of the 21st century was a box-office bomb
Surprise frontrunner emerges as potential next James Bond as producers 'love him'
QUIZ: Only the sharpest will get 100% in this General Knowledge test
The JOE Movie Quiz: Week 181
The JOE Friday Pub Quiz: Week 322
You may also like
8 months ago
QUIZ: How well do you know these iconic cereal brands?
3 years ago
Skipping breakfast proven to leave you weaker in the gym
4 years ago
There's a pretty nasty side effect when you don't eat breakfast
5 years ago
This is why you really should not be skipping breakfast
5 years ago
Irish food critic feels one essential item should be banned in the ideal Irish fry
5 years ago
We're never skipping breakfast again after reading this story
Next Page