It's almost impossible to make reference to what is oft-considered to be Roddy Doyle's magnum opus The Snapper and not instigate smirks in those surrounding you.

The second of three novels illustrating Doyle's Barrytown is a nostalgic look into an older Dublin not-yet cobwebbed. It's as simple to feel patriotic about as Italia 90 and Johnny Logan – with an admirable pluckiness that's as relatable as it is dripping in valour.

Director Róisín McBrinn, who is making her Gate debut with the project, made strong directorial choices in allowing the dryness of Doyle's wit to become characterised all on its own.

McBrinn has married the book and film exquisitely – allowing a killer soundtrack, laugh-a-minute script and stellar cast do the talking.

Of course, the set is housed by the breath-taking Gate Theatre, located just around the corner from the birthplace of Sharon's little Georgina – the Rotunda Hospital. The soft teal carpet sinks your feet in upon entering, subtly letting you know that luxury is afoot.

Chandeliers grace the ceilings in a theatre which feels far more like your fancy friend's front room than anything else. Allowing you to feel at home, at ease and ready to peer into the epicentre of Dublin life in 1980s recession-ridden Ireland when men were pub-based and a few pregnancy vodka-splashes were "grand." 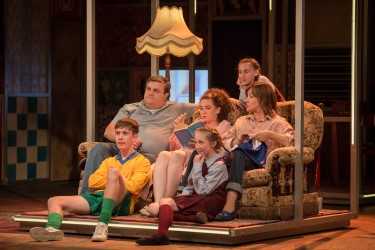 The design is something else. A thin sheet of transparent fabric casts itself over the stage, shading those in the background until a roaring Sharon enters, screaming news of her fruitful loins and setting the tone without haste.

This kickstarts the play into action, allowing McBrinn's patchwork set to emerge and immediately transport you to a bygone era of less pretence, more hairspray and a wicked sense of humour that would have you promptly excommunicated today. 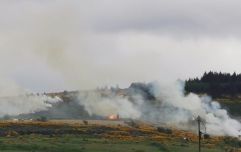 END_OF_DOCUMENT_TOKEN_TO_BE_REPLACED

Three deconstructed 'rooms' framed with metal bars are twirled into place on wheels by characters entering and exiting scenes. Oftentimes, this work looks cumbersome, despite the realisation that needs must.

The cast is magnificent, albeit some in more pressing need for microphones than others. The standout for us was certainly the dynamic between Sharon and her peers.

The four women commanded the stage seamlessly – in the way that only omnipresent cackling can – with a particularly commendable role of likeable best-friend Jackie, portrayed by Fair City alum Kate Gilmore, witnessed by the crowd.

Where Sharon weaves, she bobs – with the audience in the palm of her hand from the get-go.

Jackie is originally joined by Niamh Branigan and Amilia Stewart as the betrayed Yvonne, and the ditzy Mary, respectively.

Stewart's portrayal of the role was a tad perplexing as one could be forgiven for believing that she was irksomely childlike in her depiction.

However, it has to be said that her willingness to care for a friend in need added to the warmth of the production tremendously. Her infectious energy – which was the catalyst of erupted laughter in parts – could be seen from space. 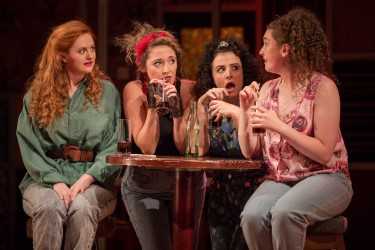 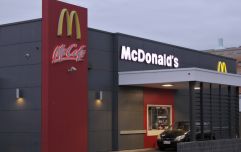 END_OF_DOCUMENT_TOKEN_TO_BE_REPLACED

Simon Delaney's portrayal of the brash, unforgiving Jimmy Rabbitte was bang on. Depicting the quintessential baron of Barrytown, Delaney dug deep into the heart of the character, giving when needs were and taking when belonged to him.

The story sees far more of a transformation in Dessie than his pregnant offspring, constructing a far softer character as scenes rolled by. Times had quite vastly changed since his sprogs entered the world, and Delaney's attention to detail when it comes to the connotations and nuances of the era were second-to-none.

Uncomplicated in a charming sense, it was often his volatile-yet-often-obvious reactions that probed the heartiest belly laughs from the crowd. 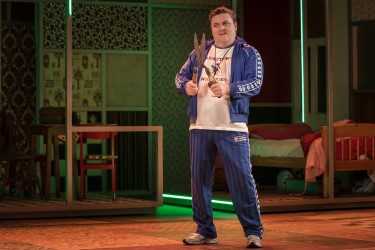 His chemistry with stage-wife Hilda Fay is palpable, often knocking genuine laughter out of each other when partaking in the more slapstick of scenes.

Fay is impressively natural in the role, emoting a stunning and understated performance in the north Dublin ma who fiercely hates bad language and fiercely loves her family.

And behold, the Snapper herself is real! An audible gasp held the floor when the nurses' station parted – following a scene of pantomime proportions depicting young Sharon's experience with labour. 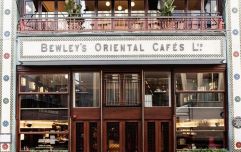 END_OF_DOCUMENT_TOKEN_TO_BE_REPLACED

An impressively well-behaved real baby graced the arms of Hazel Clifford’s Sharon – a tour de force who rarely leaves the stage, boasting tangible enthusiasm and yearn to supply the grit of 1980s Dublin.

However, all that glitters is not gold. As can be common with most theatrical performances – especially those set in the 1980s – the audience for the night we were there with was older than one would expect. And as can be expected with that revelation, the laughs don't come easy and the gags can fall flat.

Following a warm-up that took most of the first act, it seems that the general consensus was that people were pleased with a production that couldn't help but provoke high expectations, and quite obviously eager for more.

What is a truly a shame to say is that the show almost certainly ended too soon. Something that is glaringly obvious is the lack of a final scene with the Rabbitte family en masse around the hospital bed. A last glimpse of the clan can be seen waving Sharon off to the hospital, following by a blink-and-you'll-miss-it cameo of the Rabbitte juniors whirring across the stage.

Instead, loyal Jackie populates the room to meet baby Georgina for the first time. An obvious missed-trick in terms of cyclicality, a moment which would forgive you for wondering if the stage lights came on too early.

The Gate's stage adaptation allowed for little wiggle room when it came to restructuring for a newer audience. One noticeable adjustment was seen right from the get-go – when the topic of abortion was discussed with opposing arguments by the inimitable Hilda Fay.

Despite this noticeable sympathy – which can thank the benefit of hindsight – the play stays rigidly true to the book as opposed to the film, opting out for some of the more famous quotes which are still enjoyed some 30 years later.

However, one can't help but feel that the burden of expectations plays a role in judgement. With both a film and book so widely adored as The Snapper, comparison can't help but play on your mind – allowing juxtaposition to meander to the forefront.

All in all, what's most prominent from the performance is that a picture of a-Dublin-past acts as a blanket character which is seen but not heard. The city is ubiquitous in every way, from transformative accents to individualised perceptions.

A hidden protagonist in all respects, The Snapper at The Gate is, without doubt, a romantic hat-tip to the capital which feeds all characters the nourishment they desire.

The Snapper by Roddy Doyle runs at The Gate Theatre until 15 September.


popular
Four policemen fired following killing of unarmed black man in Minnesota
QUIZ: Try get 12/12 in this short general knowledge quiz
Michael O'Leary wants to do away with self-isolation restrictions for visitors to Ireland
PERSONALITY QUIZ: Which Normal People character are you?
QUIZ: Can you name the country for each of these non-capital cities?
QUIZ: How well do you remember the final season of Game of Thrones?
QUIZ: How well do you know The Lord of The Rings movie saga?
You may also like
3 days ago
Two men die in house fire in Dublin
5 days ago
Gardaí investigating after "item falls from the sky" in Dublin
5 days ago
Man dies following collision between motorbike and truck in Dublin
5 days ago
Teenager dies after being found unresponsive in Dublin
6 days ago
Gardaí seek witnesses to assault after 16-year-old boy suffers "serious head injuries"
6 days ago
Man shot in Coolock on Wednesday afternoon
Next Page