There's a Hunter's Moon this month, here's what you need to know about it

Keep an eye out.

While stargazing conditions aren't ideal in the autumn and winter months in the northern hemisphere due to the position of the moon, there's plenty there for those who love moongazing (that's definitely a word, OK?).

October’s Full Moon is called the Hunter’s Moon, or sometimes, the Blood Moon or Sanguine Moon. The latter two names are references to the hunting season, and the Blood Moon name is not to be confused with the term Blood Moon to describe a Total Lunar Eclipse. 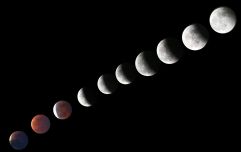 END_OF_DOCUMENT_TOKEN_TO_BE_REPLACED

The Hunter's Moon is the first Full Moon after the Harvest Moon (the Full Moon nearest the autumnal equinox) and it gets its name from hunters who tracked and killed their prey, stockpiling food for the winter ahead.

In the autumn months, there’s no long period of darkness between sunset and moonrise for several days in a row, around the time of full moon, meaning there's prolonged periods of light which is the reason why these moons have traditionally been used by hunters and farmers to finish their work.

When the deers and other animals had fattened themselves over the summer, hunters tracked and killed prey by the bright autumn moonlight.

The Hunter’s Moon is not usually any bigger or brighter than any of the other full moons. The only notable difference between it and other full moons is that the time between sunset and moonrise is shorter, usually as little as 30 minutes.

This month's Full Moon will be on Wednesday, 24 October.

For your own curiosity, below are the traditional Full Moon names for each month.

popular
Human remains found in suitcases are the bodies of two children
People want "offensive" Crown Paints advert banned after attracting hundreds of complaints
Here's how to make €9-11 on Revolut in just a few minutes
Robert Troy apologises and submits seven amendments to correct the record
One of 2022’s best hidden-gem comedy series is available to stream
QUIZ: Can you identify the famous song from the opening line?
The prequel to one of the best twists of all time and 7 more movies & shows to watch this weekend
You may also like
8 months ago
Meteor shower to light up night sky on Monday
1 year ago
The JOE Movie Quiz: Week 76
1 year ago
NASA confirms the presence of water on the moon
3 years ago
Super Blood Wolf Moon appears in the sky over Ireland
3 years ago
China are launching an "artificial moon" that will be brighter than the real one
4 years ago
Here are the best places and times in Ireland to see the rare blood moon
Next Page