These are the Top 10 jokes from the Edinburgh Fringe Festival

The world's biggest arts festival is almost over for another year.

Darren Walsh is a funny fecker... well, he is based on this one pun-tastic joke anyway.

The comedian has won the award for the funniest joke of the Edinburgh Fringe Festival, but believes that the winning one-liner isn't even the funniest joke from his full-length show, the superbly-titled Punderbolt. 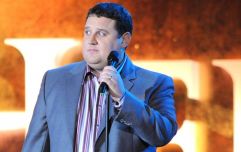 END_OF_DOCUMENT_TOKEN_TO_BE_REPLACED

Speaking to The Independent, Walsh said, “it’s great and I wasn’t expecting it so it’s a real surprise. The award seems to be gaining traction. People are maybe appreciating one-liners and puns a bit more.”

He reckons the following two jokes are even better than the top titter below though; “My cat is recovering from a massive stroke” and “Green men make me cross”.

We're stealing both of these.

Here are the Top 10 jokes from the Edinburgh Fringe Festival:

1: Darren Walsh: “I just deleted all the German names off my phone. It’s Hans-free.”

END_OF_DOCUMENT_TOKEN_TO_BE_REPLACED

2: Stewart Francis: “Kim Kardashian is saddled with a huge arse... but enough about Kanye West.”

3: Adam Hess: “Surely every car is a people carrier?”

END_OF_DOCUMENT_TOKEN_TO_BE_REPLACED

4: Masai Graham: “What’s the difference between a ‘hippo’ and a ‘Zippo’? One is really heavy, the other is a little lighter.”

5: Dave Green: “If I could take just one thing to a desert island I probably wouldn’t go.”

=8: Alun Cochrane: “The first time I met my wife, I knew she was a keeper. She was wearing massive gloves.”

10: Grace The Child: “They’re always telling me to live my dreams. But I don’t want to be naked in an exam I haven’t revised for...”

You can also check out the Top 10 jokes from Festival, as judged by The Guardian, by clicking here.

popular
Amazon Prime Video has just added 21 big movies to its library
The 50 most iconic songs of all time* have been revealed
One of the best crime thrillers ever is among the movies on TV tonight
Here is a list of every Bank Holiday in Ireland in 2023
Nicola Bulley's phone found by the river 'could be a decoy', diving expert suggests
Mark Hamill on the one piece of dialogue he got removed from the original Star Wars
Netflix has just added one of the best sci-fi movies of recent years
You may also like
5 days ago
Netflix has just added one of the funniest shows of the last 10 years
1 month ago
Elon Musk 'stunned' after being 'booed relentlessly' at Dave Chappelle show
2 months ago
Peter Kay moved to tears on stage while opening his first stand-up tour in 12 years
2 months ago
Netflix is about to stream its first ever live broadcast
3 months ago
James Corden responds to accusations he copied a Ricky Gervais joke
3 months ago
Ricky Gervais calls out James Corden for copying one of his jokes word for word
Next Page