There's nothing that soothes a hungover soul quite like a fry-up.

Sausages, bacon, beans, eggs, tomatoes, mushrooms, with a side of tea and toast - perfection. You don't need to be hungover to appreciate it, but if you've had a few beers the night before, it's most certainly a welcome sight in the morning.

But what if you need something more? Something bigger? Something... ultimate?

Then get a load of this. 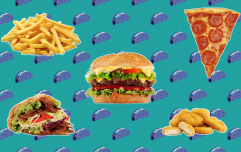 What your hungover takeaway order says about you

END_OF_DOCUMENT_TOKEN_TO_BE_REPLACED

This, friends, is the Ultimate Breakfast Box from Kats Cabin in Walsall, just north of Birmingham. This is a monster portion, with six sausages, four fried eggs, four black puddings, six rashers of bacon, four hash browns, a shitload of toast and fried bread, accompanied with two tubs a piece of beans, tomatoes and mushrooms.

The massive breakfast bonanza (yes, that is a pizza box that it's served in) costs £15, with free delivery within a mile radius of the cafe, so lucky you if you live locally!

According to the owners, no one has managed to eat the entire thing in one go - hardly surprising when you know that the box contains over 4,000 calories.

But... look at it. All that deliciousness. Who wouldn't want to have a crack at demolishing that thing?

Dear Kats Cafe: please expand your delivery radius to incorporate the whole of the UK. Many thanks.

House of Rugby Ireland · Ireland's feel-good win, Casey's initiation song, scrapping Sexton and Scott Williams interview
popular
Eoghan McDermott to leave RTÉ after six years (Report)
WATCH: Michael B. Jordan leads Jack Ryan spin-off Without Remorse
€17,500 worth of cocaine found at street party in Limerick
Sony are giving away a free game to all PS4 and PS5 owners
One man has been charged following Limerick street party, 50 FPNs issued
One of the most fertile men in Ireland is a guest on tonight's Claire Byrne Live
NUIG students told to write 2,000 word essay for breaching Covid rules
You may also like
2 months ago
This is why your hangovers get worse as you get older
1 year ago
A German court has ruled that hangovers are an illness
2 years ago
World-famous chef recommends one particular alcohol to cure your hangover
2 years ago
The masses have spoken and voted these as the 10 best hangover cures
3 years ago
New survey reveals that hangovers aren't the main reason why Irish people pull a sickie
3 years ago
A doctor reveals the hangover cures that actually work
Next Page