PICS: This new dad can't stop pranking his partner with pictures of their baby

There's Dad jokes and then there's this.

New Dad Matt Coyne has been charming us for some months now with his brutally honest parenting blog Man vs. Baby.

Since the birth of baby boy Charlie, Matt and partner Lyns have charted their journey through new parenthood; full of tips, advice and witty observations for people about raising a child.

Or has he glibly put it, about finding out 'it is possible to have so little sleep that your balls hurt.' 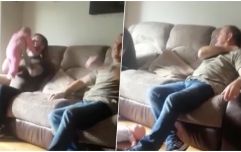 END_OF_DOCUMENT_TOKEN_TO_BE_REPLACED

Matt's latest fun tip from the week is to "prank your partner when she goes back to work after maternity leave".

'It’s true to say that as Lyns walked out the door that first morning there was quite a few tears, sobbing, and protest-soiling... but, in my defence, by lunchtime I had calmed down a bit,' Matt explained in a Facebook post.

So of course Matt pranked her.

At the start Lynn took Matt's photoshopped images well in stride asking 'Haha very funny where are you really?'.

So Matt pranked her again.

Which caused Lyns to message 'I swear I’m coming home to punch you in the testicles. What are you doing – really! Has he been ok? x'.

Which is pretty understandable Lyns, if only because we're wondering where Matt found time to knock up all these baby photos.

Still, the pair remain happy and safe after their big day out.

That's Lyns and Charlie we mean.

For all we know Matt could be in the dog house. Ooops.

popular
Man hasn't put arm down for 10 years - and this isn't even a world record
Jeffrey Dahmer’s dad thinks he knows what’s to blame for son becoming a serial killer
QUIZ: Test your knowledge with this Ultimate Friends Character Quiz
€600 energy credits and free schoolbooks for children set to be announced in Budget 2023
House Of The Dragon is already better than Game Of Thrones
The JOE Friday Pub Quiz: Week 313
QUIZ: Name the country for each of these non-capital cities
You may also like
3 months ago
Johnny Depp case: Man who went viral on TikTok claiming to be a juror admits it was a 'prank'
1 year ago
Kids pull "Bart Simpson" style prank on school board in brilliant viral clip
4 years ago
Coronation Street fans were not happy when an April Fools' joke went very wrong
4 years ago
YouTuber throws liquid at terrified pedestrians in 'acid attack' prank
4 years ago
UK TV show targeted by prank caller who repeatedly phones in to call a random woman "a b***h"
3 weeks ago
New Irish website helps customers find cheapest flights to anywhere in the world
Next Page