This is how you put your name in the history books...

Paddy Kennedy, a dairy farmer from Mount Leinster, Co. Carlow, claims he has broken a world record this past weekend. The record? Longest distance recorded while going backwards in a trailer and tractor.

Kennedy appears to have smashed the record by reversing his tractor no less than 31.26km from IT Carlow back to his home town on Sunday. Fortunately for us, Kennedy also recorded the whole thing on Facebook Live. 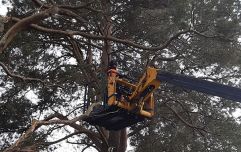 ISPCA, fire services and tree services rescue cat that was stuck in a tree for six days

END_OF_DOCUMENT_TOKEN_TO_BE_REPLACED

In the end, the full journey took Paddy two and a half hours to complete, at an average speed of 12.5km per hour.

The previous record was, in a profoundly unsurprising turn of events, also held by an Irishman. Patrick Shalvey from Cavan made a similar journey in 2014, but stopped at 20.16km.

Before Shalvey, the record was also (of course) held by an Irishman, named Eamonn Hickson, who reversed a tractor and trailer for 17.36 kilometres (10.79 miles) in Annascaul in Kerry.

You can watch the whole journey below.


The Architects Of Business || JOE · "It doesn't get bigger than this for me" - Irish scientist wins EY Entrepreneur of the Year 2020
popular
Wild Mountain Thyme director defends movie's accents and says Irish accents are too difficult to understand
QUIZ: Can you answer all the £1 million questions from Who Wants to be a Millionaire?
NPHET strongly opposed to some parts of Government plans to exit lockdown next week
Two new metro routes and rail line to Navan proposed in new transport plan for Greater Dublin area
Here are the best movies on TV this evening
QUIZ: How will you fare in our ‘Not as it seems’ quiz?
Can you get top marks in Week 57 of JOE's 19 in 90 quickfire quiz
You may also like
1 day ago
Principal of Carlow school denies claims female students were asked not to wear tight leggings to school
5 months ago
Young boy (10) dies following road collision in Carlow
5 months ago
10-year-old boy in critical condition after collision between his bike and a Jeep in Carlow
6 months ago
Gardaí find body in search for missing Carlow man
1 year ago
Carlow filling station sells €500,000 EuroMillions ticket days after selling €200,000 scratchcard
1 year ago
Seven people hospitalised after five-car collision in Carlow
Next Page