Cardinal John Henry Newman, the first Rector of Catholic University Ireland, which would go on to become UCD, has been made a saint by Pope Francis.

Newman was English, and has become the first English person to be canonised in over 50 years. 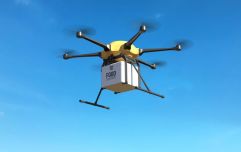 END_OF_DOCUMENT_TOKEN_TO_BE_REPLACED

According to the BBC, Newman has been credited with two miracles: curing a man's crippling spinal disease and healing a woman's unstoppable bleeding.

In addition to his status as a cardinal, Newman was regarded as a leading literary figure during his life, having published several theological essays, including Tracts for These Times.

Taoiseach Leo Varadkar has paid tribute to a figure who has had an important impact on Irish history, writing:

"Canonisation of Cardinal Newman is significant day for all Catholics and for Ireland.

"Left remarkable legacy here including founding UCD, and changed our idea of education. One of finest writers of his time, and committed to ecumenical cooperation between churches."

Four others were also canonised at the ceremony:

House of Rugby Ireland · Quinn Roux on finding a home in Ireland and Mike McCarthy brings the absolute HEAT!
popular
Cabinet to decide on €91m vaccination deal
Man arrested and charged for breaching Covid regulations in Kildare
QUIZ: Name all the countries of the EU that contain 2 vowels or less
QUIZ: Can you name all the teams in the NBA from their locations?
Status Yellow rainfall warning issued for 11 counties
INTO calls on government to reconsider plans to partially open schools
OFFICIAL: Peaky Blinders will end after the sixth season
You may also like
1 year ago
UCD researchers make breakthrough with potential cure for serious skin disease
1 year ago
UCD Students Union launch campaign promoting rent-a-room scheme
1 year ago
Housing crisis has spread like a cancer, and now it's infecting our education system
1 year ago
UCD students mask themselves on campus as part of mental health campaign
1 year ago
UCD Students' Union condemn "consent app" email sent to students
1 year ago
Labour Party says that Dublin Bus "must stop discriminating against UCD students"
Next Page