The cloud hung in the sky for around an hour.

Onlookers have been left stunned after a bizarre UFO-like cloud formed in the sky over a city in Turkey.

The cloud formed over the city of Bursa on Thursday at sunrise and remained intact for around an hour.

It had an almost circular shape and created the illusion of having a large hole in the middle.

The sunrise helped give it an eerie orange colour as well, adding to the spectacle. 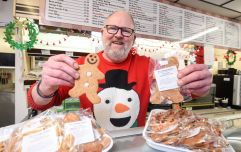 END_OF_DOCUMENT_TOKEN_TO_BE_REPLACED

The wave-like pattern is known as a lenticular cloud. These are usually found at heights of between 2,000 and 5,000 metres.

They form when the air is stable and winds blow in from hills and mountains in a similar direction through the troposphere, the lowest region of the Earth's atmosphere.

Bursa lies at the base of a mountain range, making the incredible cloud formation more likely.

Deborah Byrd of earth.sky.org explained the phenomenon: "These lens-shaped clouds typically form where stable moist air flows over a mountain or a range of mountains.

"When this happens, a series of large-scale standing waves may form on the mountain’s downwind side. If the temperature at the crest of the wave drops to the dew point, moisture in the air may condense to form lenticular clouds."

popular
Conor Mcgregor hit by car ‘at full speed’ while cycling
New Netflix series deserves to be as big as Stranger Things
Colin Farrell shouldn't win the Oscar this year
Couple left mortified after best man delivers incredible punchline during speech
The JOE Friday Pub Quiz: Week 331
DJ accidentally shoots herself in the face with a confetti cannon while performing
All of the new Netflix movies and shows arriving in February
You may also like
22 hours ago
The JOE Friday Pub Quiz: Week 331
5 days ago
Patient in his 80s killed on Cork hospital ward following horrific attack
1 week ago
Jeremy Clarkson 'axed as host of Who Wants To Be A Millionaire'
1 week ago
Ukraine interior minister among 16 dead after helicopter crashes near Kyiv nursery
3 weeks ago
The JOE Friday Pub Quiz: Week 328
3 weeks ago
Liver King sued for $25M after revelation he was actually on steroids
Next Page