Video: A rope swing in a giant canyon and a GoPro camera is every bit as good as it sounds

While we often wonder why people do foolish things, we sometimes can’t help but be impressed by some of the crazy videos we see every now and then.

In this latest GoPro video, we see a bunch of adrenaline-seekers trying out a rope swing in a canyon and we are pretty sure their thirst for madness will quenched after this brilliant footage swinging around Utah, USA.

GoPro are marketing geniuses and they make the average JOE want to buy one of their cameras in the hope of filming feats like their workers Marshal Miller and Jesse Hall (no, not the guy from The Mighty Ducks). We would even hazard a guess that as soon as you watch this video you’re going to Google the price of a GoPro camera… 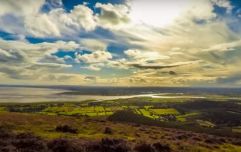 END_OF_DOCUMENT_TOKEN_TO_BE_REPLACED

If you haven’t seen GoPro’s other videos, such as the one of a lioness hunting down a buck or the up close and personal image of a shark, we urge you to watch them immediately after you have finished this great video below.

Our only bone of contention with the video is the fact that they ruined a perfectly good umbrella, the hooligans…

The Big Reviewski || JOE · The Big Reviewski with Andy Serkis, Squid Game follow-ups & the return of Succession
popular
The JOE Friday Pub Quiz: Week 265
Two prisoners who absconded from Loughan House in Cavan arrested by Gardaí
Emergency services rush to high-rise building on fire in Tallaght
Hollywood couple Joe Manganiello and Sofia Vergara seen enjoying a Cork chipper
QUIZ: Can you master this General Knowledge Quiz?
Ryanair is seeking applicants for "the worst job in Ireland"
National Lottery reveals 28 locations where tickets worth over €35,000 each were sold
You may also like
5 years ago
VIDEO: This bouncer secretly filmed how annoying drunk people are on a night out
5 years ago
VIDEO: Family finds kitten frozen in the snow and their son miraculously saves its life
5 years ago
VIDEO: Amazing footage of this guy crossing the rooftops of Gran Canaria on a bike
5 years ago
VIDEO: Irish guy's nerve-jangling and extremely dangerous ledge walk at the Grand Canyon
5 years ago
VIDEO: The incredible story of how a man and a wild pelican formed an unlikely friendship
5 years ago
VIDEO: The quality of the new GoPro Quadcopter Drone is incredible
Next Page