It’s arguably the toughest case Sherlock has ever faced. Thankfully, he has Count von Count on hand to help.

It’s safe to say that Benedict Cumberbatch is at the peak of his powers right now. As well as turns in the likes of Twelve Years a Slave, The Hobbit and the most recent instalment of the Star Trek franchise, he’s also the star of the wildly popular BBC detective series Sherlock, the latest series of which aired to mixed reviews last month. 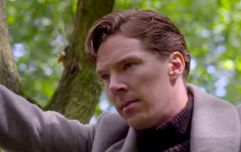 Video: Behind the scenes at Benedict Cumberbatch's Vanity Fair shoot

END_OF_DOCUMENT_TOKEN_TO_BE_REPLACED

You know you’re truly A-list when you’re invited onto Sesame Street and Cumberbatch followed in the footsteps of famous people past and present with a brief sketch that lightly poked fun at his renowned powers of deduction as the famous detective Sherlock Holmes.

With the help of Count von Count, Cumberbatch attempts to solve a case set forth by his supposed arch-nemesis Murray-arty and the end result is very charming and fairly amusing, as you would expect from the always excellent Sesame Street crew.

popular
QUIZ: It's time for one of our trickiest General Knowledge Quizzes yet
The JOE Movie Quiz: Week 161
Landlords must give longer eviction notice periods under newly passed legislation
QUIZ: Can you get 100% in JOE's great big halfway through 2022 quiz?
The 24 biggest movies still to come to cinemas in 2022
An underappreciated sci-fi blockbuster is among the movies on TV tonight
Jordan Peterson suspended from Twitter over Elliot Page comment, says he won't apologise
You may also like
1 month ago
Long-time Marvel star says criticising Marvel movies is unfair
1 month ago
SNL: Watch Benedict Cumberbatch tackle the US abortion debate and Depp vs Heard
2 months ago
Benedict Cumberbatch on Doctor Strange 2: 'The intent is for this to be the most scary Marvel film yet'
3 years ago
WATCH: The trailer for Brexit, a new movie starring Benedict Cumberbatch is coming under some criticism
4 years ago
Actor Benedict Cumberbatch rescues cyclist from an attack
4 years ago
Benedict Cumberbatch's new TV series is a wild booze-soaked journey spanning the decades
Next Page