Video: Cork man surprises mother by returning from Oz for her 50th birthday. Her reaction is wonderful

This will warm the heart of even the most cynical of people. Wonderful.

Emigration remains a fact of life in Ireland and there are few families in the country that aren’t or haven’t been affected.

While it’s tough on parents to be separated from their sons and daughters for such long periods, it does lead to joyous and emotional scenes when they are reunited again and a lot of returning Irish emigrants in recent years have decided to make their return a complete surprise. 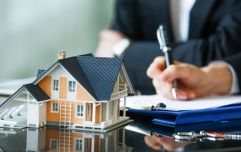 END_OF_DOCUMENT_TOKEN_TO_BE_REPLACED

Daniel Lynch left Ireland for Australia three and half years ago and told his mother Jacqui that he wouldn’t be able to make it home for her 50th birthday on account of his recent move to New Zealand.

Daniel did make the trip home for the first time in two years and Jacqui hadn’t a Scooby Doo about it.

Daniel’s brother Shane recorded their reunion and if it doesn’t bring a smile to your face then you, sir or madam, have a heart of stone.

Hat-tip to Shane Lynch for sending this one our way

The Big Reviewski || JOE · Mortal Kombat director Simon McQuoid and new Sub-Zero star Joe Taslim on fatalities and fight scenes
popular
The JOE Friday Pub Quiz: Week 242
Here are the best movies on TV this evening
Kate O'Connell lays into Fine Gael in explosive Claire Byrne interview
"Giant" piece of Chinese rocket set to hit Earth this weekend
COMPETITION: Win a star-gazing camping adventure to the stunning Aran Islands for you and your housemate
Penneys shopping by appointment booking portal is now live
The 50 most iconic songs of all time* have been revealed
You may also like
3 hours ago
Family surprised as Daniel O'Donnell sings at mother's funeral
1 week ago
New episode of true crime podcast West Cork to be released in the coming days
2 weeks ago
Man arrested after threatening pedestrian with a hammer and robbing their dog
4 weeks ago
Female Garda in hospital after being dragged 100 feet by car during drug search in Cork
1 month ago
17 Cork city centre streets to be permanently pedestrianised
1 month ago
Man arrested after leading Gardaí on high speed chase in Cork
Next Page