We understand that there’s a lot to digest in that headline, but trust us, it will make sense as soon as you see it.

Wonderful creatures that they are, dogs can often surprise their owners years into a relationship by displaying talents that they had previously kept hidden under wraps. 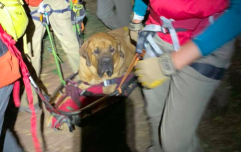 END_OF_DOCUMENT_TOKEN_TO_BE_REPLACED

Normally it’s a trick or two or the ability to respond to specific commands, but not many owners expect their dogs to showcase a sweet singing voice, especially not when their song of choice is the religious anthem Ave Maria.

Gerry and Caroline Dillon from Dundalk discovered that they had something of a Pavarotti puppy on their hands while they were watching The Hangover 3 the other night, when their Labrador Holly spontaneously joined in during the scene where Alan sings the hymn at his Dad’s funeral.

Gerry claims that she has never heard Holly howl like it before or since but we imagine that this is just one example of Holly’s talents; after all if she can sing Ave Maria like that, imagine the job she’d do on more fitting material from the likes of Snoop Dogg, Nate Dogg, Three Dog Night or The Pet Shop Boys?

We’ll get our coats.

Hat-tip to Gerry Dillon for sending this one our way

popular
The Toy Show DJ brothers have been offered their very first gig
Clint Eastwood's final western is among the movies on TV tonight
The full list of all the new shows and movies coming to Netflix in December
The JOE Friday Pub Quiz: Week 271
PCR tests to be required for all international arrivals to the UK
QUIZ: Let's get cracking with this General Knowledge Quiz
Ryanair's "virtue signalling" claims are indicative of Ireland's view on the Irish language
You may also like
2 weeks ago
Pet dog catches Covid from its owner in first UK case
1 month ago
Glorious scenes as hero dog breaks Guinness world record
4 months ago
Pet owners advised to do 'pavement test' to see if they should walk their dog
4 months ago
There's been an increase in people giving up their dogs following lockdown
1 year ago
Dogs Trust Ireland release chilling advert about illegal sale of puppies
2 years ago
5 dog friendly breaks for you and your pup
Next Page