VIDEO: Look out for these 18 Irish lunatics on the darts on Sky Sports tonight

Ray Ford from Knock is having his stag in London this week and it looks like himself and his friends are in for a brilliant weekend.

They're heading off to the World Darts Championship at the Ally Pally and they've dressed up for the occasion.

Ray is the bowling ball and his buddies are the pins, look at the state of them.

There's 18 in the group in total with boys from Kerry and Mayo making up the most of it and they're sure to get some attention with those strike-ing... costumes. Am I right?

The guys also have a party piece, check that out here. 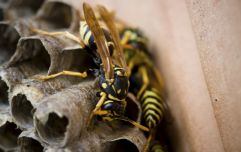 END_OF_DOCUMENT_TOKEN_TO_BE_REPLACED

The darts is live on Sky Sports 2 at 8pm tonight, keep your eyes peeled.

Have a good night, guys.

popular
One of the best Irish movies ever made has just been added to Netflix
Ireland starting to see stabilisation in indicators for Covid incidence, says CMO
New airline to provide low-cost flights from Ireland to Iceland
A woman has died and several injured after fatal Kilkenny crash
Here's the line-up for this week's episode of The Late Late Show
Six must-watch movies coming to Irish cinemas this December
Here are all the movies on RTÉ this Christmas
You may also like
2 months ago
Met Éireann issues status yellow weather warning for three counties as thunder and rain to batter the country
3 months ago
Two men arrested in connection with discovery of woman's body in Mayo released without charge
5 months ago
Mayo residents plagued by "Fast and Furious-style" boy racer meetings
5 months ago
Irish man takes home top prize in world photography competition
5 months ago
Family of Garda Colm Horkan say "life will never be the same" one year after tragic death
6 months ago
National Lottery urging Cork players to check their tickets after €2.4 million win
Next Page