This is just magic... kind of.

Fair play to Steven Brundage. While returning home from a party in New York, the magician was pulled over by the cops for speeding and managed to wangle his way out of getting a ticket by performing magic tricks using his trusty Rubik's Cube.

Here's what Steven wrote on his YouTube page about the event: 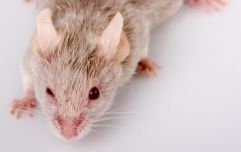 END_OF_DOCUMENT_TOKEN_TO_BE_REPLACED

"December 5th around 3am I was pulled over doing 42 in a 30 MPH. I told the cop I was coming from a Holiday Party in NYC. He asked why I had all the cards in my car and I told him I was a magician. He then asked me to show him a magic trick.

I'm glad to say I left without a ticket."

*JOE goes back to trying to figure out how to solve a Rubik's Cube, falls over, gets speeding ticket*

Still though, it's good craic so sit back and enjoy...

popular
The JOE Friday Pub Quiz: Week 307
WATCH: Flight makes scary 'lowest ever landing' at Greek airport, narrowly avoiding plane spotters
Danny Healy-Rae insists the Puck Fair goat is safe and well looked after
Netflix has just added an incredibly tense 97-minute thriller
Shooting stars set to light up Ireland's skies this weekend
Actress Anne Heche "not expected" to survive coma following car crash
A great underseen action thriller is among the movies on TV tonight
You may also like
7 years ago
Video: This Epic Rap Battle between the Ghostbusters & Mythbusters is very funny
7 years ago
GIF: This manager in Bulgaria has one of the best celebrations in football
8 years ago
That's Gas! Sociable seal surprises surfers by sitting on surfboard...
8 years ago
Video: Hi-res version of Deadpool test footage FINALLY shows up online
8 years ago
That’s Gas! English inventor creates giant ‘fart machine’ in order to fart at France
8 years ago
Video: Callan’s Kicks ‘Westenders’ sketch takes the p*ss out of the Royal Family
Next Page