We’ve seen celebrities reading mean tweets about themselves, but this time around Dublin Bus’ Network Noel decided to see what people were saying on Twitter.

Have you ever tweeted something mean or hatful regarding Network Noel? Then your tweet might just feature in the video above. In fairness, a quick search on Twitter will show you that while there’s quite a lot of love, there's also quite a lot of hate for the yellow football shaped mascot. 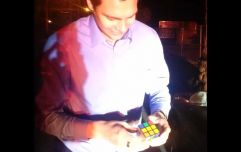 END_OF_DOCUMENT_TOKEN_TO_BE_REPLACED

So Noel decided to sit down on a Dublin Bus recently – we’re not sure which number bus, mind you – to have a look at what people had to say about him on Twitter.

The results were unsurprisingly mean.

In fairness to Dublin Bus, it’s good to see they’re making a joke out of the fact that there’s a fair bit of disliking for their new mascot and Noel’s hastags at the end might even make you feel a little bit bad for the “football on a stick”.

popular
Netflix has just added an incredibly tense 97-minute thriller
Irish person dies after drowning in Spanish resort swimming pool
18 counties hit with weather warning as temperatures set to reach 29 degrees
Nearly 100 flights delayed at Dublin Airport on Monday
A county-by-county breakdown of the average rent in Ireland as rent inflation reaches record high
Second Covid booster vaccine being rolled out to more cohorts this week
Top 100 stores and five friendliest places in Ireland chosen by Retail Excellence
You may also like
7 years ago
Video: This Epic Rap Battle between the Ghostbusters & Mythbusters is very funny
7 years ago
Video: Watch as two lads scare the absolute bejaysus out of their sleeping mate...
7 years ago
GIF: This manager in Bulgaria has one of the best celebrations in football
8 years ago
Video: You need to see this Sligo shop owner accidentally crashing a motorbike inside his store...
8 years ago
That's Gas! Sociable seal surprises surfers by sitting on surfboard...
1 month ago
Ireland looks towards a four-day work week – is it all it's cracked up to be?
Next Page