One of the biggest recorded.

Any keen surfers will know that an occasional wipeout is part of the territory but this footage of British surfer Tom Lowe is taking extreme to a whole other level.

This footage was taken during a recent trip to Puerto Escondido in Mexico and it resulted in him suffering extreme whiplash and being submerged under the water for over 15 seconds. 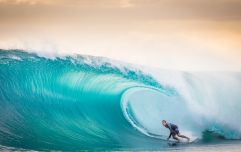 END_OF_DOCUMENT_TOKEN_TO_BE_REPLACED

Speaking with The Mail he said ""This wipeout was definitely the longest free fall that I have ever had”.

Lowe has since been nominated for the TAG Heuer Wipeout of the Year award on the back of this incident and if he doesn't win the award then we'll be amazed.

You wouldn't get this in Bundoran. Take a look.

popular
QUIZ: Is your General Knowledge up to scratch?
The 50 most iconic songs of all time* have been revealed
QUIZ: Can you identify which of these countries have the colour white in their flag?
The JOE Friday Pub Quiz: Week 243
Gardaí seize phone of Dublin publican amid Leo Varadkar leak inquiry
The JOE Music Quiz: Week 57
QUIZ: How many of these characters from The Simpsons can you name?
You may also like
1 month ago
Olympic surfing hopeful Katherine Diaz dies after being struck by lightning while training
2 years ago
Ireland looks stunning in this new surfing film starring one of Ireland's greatest surfers
2 years ago
One thing you definitely have to try the next time you're in Donegal
3 years ago
WATCH: The world record for the biggest wave ever surfed has been broken
3 years ago
New movie showcases Ireland as one of the most stunning surfing destinations on the planet
3 years ago
Surfer breaks back as a result of wipeout caused by giant 60-foot wave
Next Page