VIDEO: This woman absolutely floors a man that's trying to pinch her bum

This bloke picked on the wrong woman.

He will probably be keeping his hands to himself in future after being punched to the floor outside a shop in Inezgane, Morocco.

A woman was out minding her own business when she bent down next to a motorbike. 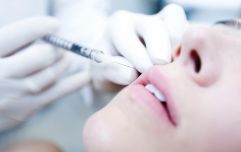 END_OF_DOCUMENT_TOKEN_TO_BE_REPLACED

But the man appeared to try and put his hands on her on his way past. Quick as a flash thought she swivelled around and brilliantly floored him with a big right hand.

The shot was thrown with such force that it sent him sprawling into a food stand inside the shop. he didn't look like he was getting up from it any time soon.

The Big Reviewski || JOE · The Big Reviewski with Dune, a mini-Hangover reunion & the best of Timothée Chalamet
popular
Report: Crew left Alec Baldwin film set in protest before fatal shooting
The JOE Music Quiz: Week 78
The JOE Friday Pub Quiz: Week 266
9 of the best horror movies on Netflix right now
QUIZ: Time to get down to business with this General Knowledge Quiz
WATCH: Massive queues in Dublin as nightclubs finally reopen
Here's the line-up for tonight's episode of The Graham Norton Show
You may also like
4 years ago
Bad news fellas, Irish men have been ranked the ugliest in the world
4 years ago
Three important things every man should know by the time they turn 30
5 years ago
FEATURE: 8 things that men never talk about, but should
5 years ago
19 penis problems every man knows far too well [NSFW, obviously]
5 years ago
Posh magazine publishes a guide to being a modern gentleman, some of the points are feckin' hilarious
6 years ago
Video: Guy finds women's underwear on the street and it confuses the hell out of him
Next Page