WATCH: Adele brought an Irishman and his dog onstage at her concert and the crowd loved it

The pair were very popular...

One way to ensure an unforgettable night at a concert? That would be getting invited on stage by Adele and having her fawn over your dog in front of the entire audience.

That's exactly what happened in California when Tommy O'Malley attended the gig with his Maltipoo, Casper, and managed to catch the eye of the singer during the concert. 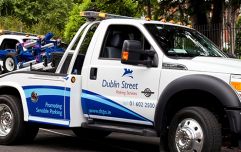 PIC: The clampers made out like bandits at the Adele gig in Dublin last night

END_OF_DOCUMENT_TOKEN_TO_BE_REPLACED

Tommy has been living in America for the past number of years and how he managed to get the dog into the concert with him we're not sure, but Casper went down a treat.

This could be our second favourite Adele moment of the year so far, it comes in just behind this guy's genius Adele-inspired text conversation with a scammer...

Advertisement
Cheers to Eilish O'Malley for sending this our way.
Got a story for JOE? Hit us up on Facebook or Twitter, send it to our WhatsApp number 087-4001102 or mail editorial@JOE.ie.

popular
Met Éireann issues weather warning for three counties
QUIZ: Take your very best shot in this tough General Knowledge Quiz
The JOE Movie Quiz: Week 160
QUIZ: Can you conquer this delightfully difficult General Knowledge Quiz?
A feel-good comedy with a Springsteen soundtrack is among the movies on TV
New horror movie trailer has one of the best jump scares in years
The JOE Music Quiz: Week 110
You may also like
4 months ago
Here's the line-up for tonight's episode of The Graham Norton Show
5 months ago
The 10 Worst Songs of 2021
7 months ago
Special one-off concert from Adele to air on Irish TV this weekend
8 months ago
The JOE Music Quiz: Week 78
8 months ago
Adele finally confirms release date for new music
3 years ago
9 acts that could and probably should headline Croke Park in the future
Next Page