The big question is... do you eat it with a spoon or a fork?

Ever wanted to visit Italy?

They do amazing pasta and ice cream there, in case you didn't know.

Well, now you can get the best of both worlds, and without paying for a plane ticket, because Fantastic Flavours Ice-Cream Parlour in Cork have created a pasta ice cream!

First things first, we know exactly what you're thinking (because it was the first thing we thought, too), and no, this isn't pasta-flavoured ice cream, or ice cream-flavoured pasta.

The Tutti Pasta Vanuli is available for the store on Main Street in Youghal, and the store itself was the winner of Dessert Outlet of the Year at the Food Awards Ireland, as well as the winner of Best Artisan Ice Cream in Ireland.

Store owner Micael O'Hurley told JOE how they came up with the idea: 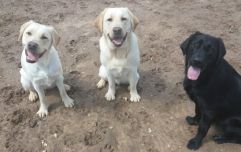 END_OF_DOCUMENT_TOKEN_TO_BE_REPLACED

"Ice Cream has been around for a couple thousand years. Trying to find new ways to make it exciting is difficult. We took a page from the Chinese, who invented noodles, the Italians, who created ragu, and the Germans, who perfected cheese.

"Being an artisan ice cream maker, we then decided to make the noodles from vanilla ice cream, ragu from raspberry sauce and the Parmesan from crushed meringue and voila! Fantastic Flavours Tutti Pasta Vanuli was born."


popular
Here are Ireland’s favourite takeaways, as per the National Takeaway Awards
QUIZ: Week 16 of JOE's 19 in 90 quickfire quiz is here
Met Éireann forecasts risk of sleet and possibly snow in parts of Ireland this weekend
Terry Jones from Monty Python has died, aged 77
Maria Bailey has announced she will not run in the general election
New documentary series examines three brutal murders and a mysterious satanic cult
Haunting of Hill House star says the sequel will be more intense than Season 1
You may also like
2 days ago
Man in serious condition after being doused in petrol and set on fire during burglary in Cork
2 days ago
Gardaí warn of phone scam that could cost consumers a "small fortune"
4 days ago
Two men arrested after serious assault in Cork
4 days ago
Proposed Cork to Limerick motorway "makes no sense" says Eamon Ryan
5 days ago
A man in his 20s has died following a stabbing in Cork city
1 week ago
PICS: €300,000 of cannabis herb seized in Cork
Next Page