WATCH: Footage of a mongoose taking on several lions has gone viral

I think I speak for us all when I say: fair play to this mongoose.

Mongooses (mongeese?) are confusing animals. They're basically like a slightly longer stoat, or weasel, but for some reason, they are totally fearless — and everything else in the animal kingdom seems to be terrified of them.

They're most famous for hunting and killing poisonous snakes, but this weekend, a video has gone viral of a tiny mongoose absolutely holding its own against a pack of lionesses. 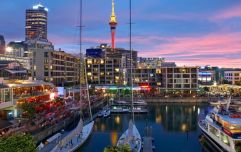 Wanna go to Auckland for the Lions V New Zealand final? This is the cheapest way to get there

END_OF_DOCUMENT_TOKEN_TO_BE_REPLACED

As you can see from the video as well, the mongoose totally instigates the confrontation, and the lions want absolutely none of it. Don't turn your volume up loud though, because that mongoose is screaming the house down.

popular
RTÉ to seek additional voluntary redundancies after 87% of staff reject salary cuts
Ryanair set to take first delivery of "Gamechanger" aircraft this month
The JOE Movie Quiz: Week 102
Here are the restrictions being eased today as Ireland continues reopening
Ice-cream shop owner issues 99 warning amid "worldwide shortage" of flakes
QUIZ: How many of these characters from The Simpsons can you name?
The 50 most iconic songs of all time* have been revealed
You may also like
3 years ago
WATCH: Sean O'Brien and his Lions team-mates joyously belting out a Westlife classic
3 years ago
WATCH: Sean O'Brien somehow gets back on his feet after crunching hit by Jerome Kaino
3 years ago
Tadhg Furlong the star of our player ratings as Lions fight back to claim draw with New Zealand
3 years ago
The best reaction to a pulsating yet anti-climactic final test as Lions draw series with New Zealand
3 years ago
Air New Zealand's attempt at an Irish accent is so, so bad, it's actually brilliant
3 years ago
Conor Murray's god-like status is the talk of every sports reporter today
Next Page