Not all heroes wear capes...

Dave Messinger from Clonmel, Tipperary was out walking his dog, Daisy, in a local park recently when a disaster struck.

Daisy was playing with another dog when she fell into the River Suir, which was in flood due to all the recent rain, and was swept down stream. 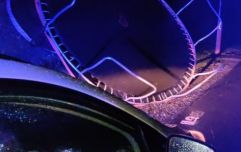 PIC: Gardaí discover trampoline on the M8 at 3am

END_OF_DOCUMENT_TOKEN_TO_BE_REPLACED

Dave tried to fish her out but the water quickly became too deep for him and the five-month-old puppy was dragged further downstream and out of sight while Dave frantically tried to find a way to save her.

After an hour of searching, they found Daisy clinging onto an old swan's nest but it was impossible to reach her from the bank.

Dave, with the help of some others, discovered that there was a kayaking course going on further up stream and they enlisted the help of a man named Wesley from the Balto kayak club to rescue the poor stranded Daisy from her watery nest.

According to Dave, Daisy is now at home safe and sound after her exploits today. She's being spoiled rotten after her shock.

Cheers to Dave Messinger for sending this our way.
Advertisement
Got a story for JOE? Hit us up on Facebook or Twitter, send it to our WhatsApp number 087-4001102 or mail editorial@JOE.ie.

popular
Jordan Peterson suspended from Twitter over Elliot Page comment, says he won't apologise
The JOE Friday Pub Quiz: Week 301
County where winning Lotto jackpot ticket worth over €5.5 million was sold confirmed
Electric Ireland announces second major price hike in recent months
Parent's Benefit Leave in Ireland is being extended from today - here's what you need to know
The full list of cancelled flights in and out of Dublin Airport on Friday (so far)
Netflix reveals full line-up of new shows and movies arriving in July
You may also like
1 month ago
Man dies after being struck by lorry in Tipperary
1 month ago
Tipperary woman banned from keeping dogs following animal cruelty conviction
1 month ago
Limerick hurler arrested following alleged altercation with Tipperary player in Limerick pub
1 month ago
ISPCA rescue three dogs living amongst raw meat in Tipperary
1 month ago
Takeaway operator imprisoned for three months following food safety breaches
2 months ago
Landlord filmed assaulting and threatening to kill a tenant in Tipperary
Next Page