Something you don't hear every day...

The fourth year of the acclaimed City Of Derry International Choral Festival took place in the Maiden City last weekend, as thousands of musicians from all over Ireland, the UK and the rest of the world descended on Derry to sing, entertain and soak up the warm Irish welcome... and the not-quite-as-warm Autumn sunshine.

One of the best choirs in the world, The Sixteen, wowed on Friday night, while German a capella group, SLIXS, entertained the evening before, but it was the International Competition - involving choirs from countries including Poland, Hungary, England, Ireland, Germany and from as far away as Indonesia - which really captured the enthralled audience's imagination. 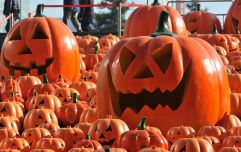 END_OF_DOCUMENT_TOKEN_TO_BE_REPLACED

In fact, it was the aforementioned Indonesians - Bogor Agricultural University Student Choir, Agria Swara - making a whopping 24,000km round trip just to be in the city, who took home the top prize of the festival, the Oak Tree Of Derry Perpetual Trophy.

Just look how happy they were when they heard their name read out as winners...

Congratulations of Agria Swara (Bogor Uni) from Indonesia, on winning the @codichoral, & well done to all involved on a brilliant festival. pic.twitter.com/ILYsFqhyQF

To celebrate their victory and to close the festival in the most perfect of ways, the choir took to the stage one last time to perform a beautiful Irish lullaby, once made famous by Bing Crosby and more recently by The Simpsons; 'Too-Ra-Loo-Ra-Loo-Ral (That's an Irish Lullaby)'.

All images via Lorcan Doherty Photography

The Big Reviewski || JOE · The Big Reviewski with Andy Serkis, Squid Game follow-ups & the return of Succession
popular
The JOE Friday Pub Quiz: Week 265
Emergency services rush to high-rise building on fire in Tallaght
Ryanair is seeking applicants for "the worst job in Ireland"
Two prisoners who absconded from Loughan House in Cavan arrested by Gardaí
Hollywood couple Joe Manganiello and Sofia Vergara seen enjoying a Cork chipper
QUIZ: Can you master this General Knowledge Quiz?
A modern classic from Quentin Tarantino is among the movies on TV tonight
You may also like
1 week ago
Derry ice-cream shop apologises for logo's "striking resemblance" to Parachute Regiment’s insignia
4 weeks ago
Two men charged with the murder of journalist Lyra McKee
2 months ago
Appeal for information as man attacked with strimmer in Derry
6 months ago
"Deep concern" as burning car abandoned on train track in Northern Ireland
1 year ago
61-year-old woman in critical condition following shooting in Derry
1 year ago
This new Irish song is the lockdown 'LOVE' you need right now
Next Page