WATCH: Irish magician makes you question life, the universe and M&Ms in Tesco

What is this supermarket sorcery?

After having blown us away by making things vanish in Ikea, the Irish magician and mentalist Joel has returned to wrinkle our brains.

Only this time, he is turning Tesco into his magical lair. 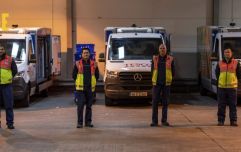 END_OF_DOCUMENT_TOKEN_TO_BE_REPLACED

The County Down performer has flipped logic on its head in each aisle; becoming every child's hero by turning Rice Krispies into Coco Pops, and every Returns and Refunds worker's nightmare by making coins appear in factory-sealed bottles of water.

If you're in the mood to be hypnotised by some pretty nifty tricks or you're keen on trying to catch him out, then check out this video. Especially in the case of the latter, because really this is frustratingly mind-bending.

If you dug that, you can check out his weekly updated magic videos on his Instagram account here.

popular
Kirstie Alley: Cheers star dies aged 71
We just got the first trailer for a movie not out until 2024
Amazon Prime Video has just added 38 very big movies to its library
The Banshees Of Inisherin is arriving on Disney+ sooner than you might expect
5 must-watch shows and movies streaming on NOW in December
Woman hit by rollercoaster is trapped in own body after finally awaking from coma
Mia Khalifa claims seaside town is better than Miami
You may also like
6 months ago
Wage increases on the way for Irish Tesco employees with launch of €40 million pay package
1 year ago
Batch of Tesco baby food recalled over possible presence of blue plastic pieces
1 year ago
Tesco to hire 225 drivers for grocery deliveries in towns and villages across Ireland
2 years ago
Tesco to create 450 permanent jobs and 700 temporary jobs across Ireland
2 years ago
Tesco make changes to their delivery system to favour elderly and in need customers
2 years ago
Tesco Ireland to introduce priority shopping hours for healthcare workers
Next Page