WATCH: Mark Wahlberg and Will Ferrell's appearance on The JOE Show was start to finish comedy gold

Hollywood royals, Mark Wahlberg and Will Ferrell joined us for a #JOEshow special this week!

The Daddy's Home 2 stars had the absolute craic in Dublin during the promo last week, and we like to think we may have been one of their highlights.

We (temporarily) moved house and took The #JOEshow to the Academy to welcome Mark and Will to Dublin. 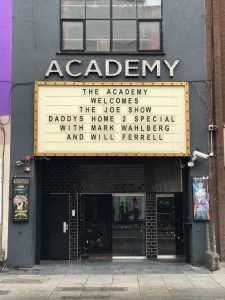 END_OF_DOCUMENT_TOKEN_TO_BE_REPLACED

As we all know Will Ferrell is a direct descendent of the O Fearghail clan of Longford, so we thought it was only fair to test both Will and Mark's knowledge of our Emerald Isle.

How well do they really know the people of Ireland? Could they tell their Neesons from their Gleesons? 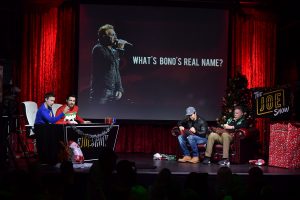 After a good effort but poor result from the lads we gave them the chance to redeem themselves. From JOE to them, both of the Rory McIlroy fans lads received a beautifully wrapped golf club for Christmas.

With that in mind we challenged them to chipping challenge with added washing machine and hilarity ensued.

After watching Daddy's Home 2, we really got into the Christmas spirit so of course we couldn't let the boys go home with just their golf clubs.

Following their Chipping Challenge redemption we felt they deserved their *Official* Certificates of Irishness. (*JOE Official only) 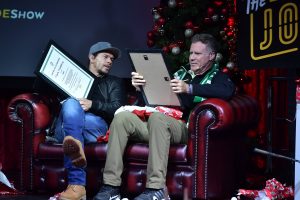 Daddy's Home 2 is in cinemas now.

The Big Reviewski || JOE · The Big Reviewski with Andy Serkis, Squid Game follow-ups & the return of Succession
popular
The JOE Friday Pub Quiz: Week 265
Two prisoners who absconded from Loughan House in Cavan arrested by Gardaí
Emergency services rush to high-rise building on fire in Tallaght
Hollywood couple Joe Manganiello and Sofia Vergara seen enjoying a Cork chipper
QUIZ: Can you master this General Knowledge Quiz?
Ryanair is seeking applicants for "the worst job in Ireland"
National Lottery reveals 28 locations where tickets worth over €35,000 each were sold
You may also like
2 weeks ago
Dundrum Town Centre to host job fair to find employees for “busy christmas period”
1 month ago
"Shop early for Christmas" warning issued amid global supply concerns
1 month ago
Penneys issues warning to customers as autumn/winter inventory delays expected
1 month ago
"All restrictions" should be lifted by Christmas including reopening of nightclubs, says Stephen Donnelly
1 month ago
Brown Thomas has opened its Christmas store… 127 days before Christmas
9 months ago
The JOE Music Quiz: Christmas Special
Next Page