WATCH: This pint-drinking baby from Kerry is all anybody can talk about right now

How can such a short video raise so many questions?

First and foremost, who is pintbaby? Second, why does nobody in that pub care or even really seem to notice that baby is holding and drinking a pint with almost no assistance whatsoever? Third, how are we even supposed to feel about a baby drinking a pint of Guinness? On the one hand, alcohol cannot be good for a tiny baby, but on the other hand it is definitely, definitely hilarious.

All of these quandaries have sprung from a video shared by RTÉ journalist Cian McCormack on his Facebook page. It's a clip from an archived episode of RTÉ's Nationwide entitled "Single Women Scarce In Kerry," about how hard it was to find a woman in Kerry back then — an epidemic entirely separate to the epidemic of pint-swilling babies that was apparently sweeping through Kerry at the time. 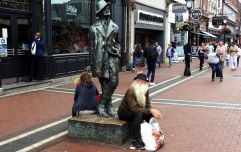 RTÉ to broadcast 30-hour production of Ulysses on Bloomsday

END_OF_DOCUMENT_TOKEN_TO_BE_REPLACED

The video has amassed 3,600 views in the 22 hours since its been posted but it's fair to say that it deserves far more. We need everybody to weigh in on this pintbaby issue until we can get to the bottom of the many questions it has posed to our society.

The Big Reviewski || JOE · The Big Reviewski with Dune, a mini-Hangover reunion & the best of Timothée Chalamet
popular
One of the best thrillers of the decade is among the movies on TV tonight
The full list of all the new shows and movies coming to Netflix in November
Vin Diesel walked Paul Walker's daughter down the aisle
The JOE Movie Quiz: Week 125
QUIZ: Get your thinking cap on with this General Knowledge Quiz
After a decade on the run, Colombia's most wanted drug lord is finally captured
The JOE Friday Pub Quiz: Week 266
You may also like
1 week ago
Not time to "hit the red panic button", says HSE chief Paul Reid
2 weeks ago
Sarah McInerney grills Eoin O'Broin during heated Prime Time debate
2 weeks ago
Disappointment as The Den has been cancelled again
3 weeks ago
RTÉ News apologises for "any distress caused" by concentration camp report
3 weeks ago
RTÉ News called on to apologise over "false information" about concentration camp
3 weeks ago
Investigation at Irish hospital after baby organs sent for incineration without consent
Next Page