After many decades in show business, it's fair to expect that Rod Stewart might add a bit of flair to a simple Scottish Cup fifth round draw.

It's unlikely, however, that anyone expected this much spice from the septuagenarian rock 'n roller.

The Do Ya Think I'm Sexy singer made huge lunges for the pot any time he had to pull out a ball, and accompanied each announcement with various surprised noises. 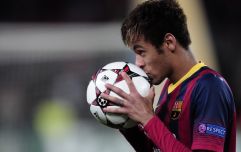 Pic: Neymar had some get-up on him after the Celtic game last night

END_OF_DOCUMENT_TOKEN_TO_BE_REPLACED

Stewart didn't appear to quite be in the moment, ignoring the hand of the host when he reached out for a shake at the end of the draw. Luckily it all appeared to be taken in good fun, with the Sky Sports presenter telling Rod that he has a future as a bingo caller.

Rod's own beloved Glasgow Celtic drew Inverness Caledonian Thistle in the fifth round of the Scottish Cup.

House of Rugby Ireland · Munster's nail-biting win, European games in doubt and Darren Cave interview
popular
QUIZ: Can you name the Marvel Cinematic Universe film from just a single screen shot?
QUIZ: Can you pass your driving test and guess the meaning of all these road signs?
The JOE Movie Quiz: Week 85
The JOE Friday Pub Quiz: Week 226
QUIZ: Can you recognise each of these iconic Dublin pubs?
QUIZ: Can you correctly identify these European country flags?
QUIZ: Name all the countries of the EU that contain 2 vowels or less
You may also like
1 year ago
Ringrose and Ruddock epitomise Leinster class as PRO14 title retained
2 years ago
After playing in the Liam Miller tribute game, Roy Keane went for a kickaround with some local Cork kids
2 years ago
WATCH: Ireland and Celtic player Johnny Hayes rescues young Rangers fan from bullies and delivers lovely message
2 years ago
Alex Ferguson pays glowing tribute to Liam Miller in official tribute match programme
2 years ago
Liam Miller charity match organiser dismisses reports that the GAA have given go-ahead for Páirc Uí Chaoimh
2 years ago
Roy Keane and Paul Scholes among Man Utd legends coming to play in Cork for Liam Miller tribute match
Next Page