Much like indie rock, checked shirts, and tennis shoes, Banksy was incredibly cool back in the heady days of 2006.

The mysterious character went around the country spray-painting his artwork onto public and private property and sent out the important message that it was possible to be universally loved while technically breaking the law.

But times have changed since 2006, where Banky's masterpieces were once restricted to the grimey streets, they now line the walls of the Bristol City Centre Holiday Inn.

END_OF_DOCUMENT_TOKEN_TO_BE_REPLACED

So perhaps now the time is right for the mystery artist to reveal his identity, and we might be about to find out if he is, in fact, a white man with dreads (he definitely is), at the South Bank Sky Arts Awards.

The hippest, freshest arts awards ceremony on the circuit, the South Bank Sky Arts Awards (held at underground British art's cultural home of the Savoy Hotel) will be attended by the likes of Melvin Bragg, Elaine Paige, and... Stormzy.

But, according to The Mirror, it's very possible that Banksy will also be in attendance – and given that he's up for an award, we could be about to find out his identity for the first time. 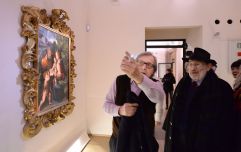 END_OF_DOCUMENT_TOKEN_TO_BE_REPLACED

What if Banksy is actually Stormzy?

The Bristolian artist is up for an award for his Dismaland Bemusement Park, an attraction which achieved huge critical and commercial success.

If Dismaland wins the Visual Arts category, Banksy will be invited onto the stage to collect his award.

popular
New Netflix series deserves to be as big as Stranger Things
Netflix has just added one of the best sci-fi movies of recent years
BBC apologises after calling Paul Mescal 'British' in Oscar coverage
This is what the cheapest house for sale in Dublin looks like
Irish names among the top 10 hardest words for British people to pronounce
The 50 most iconic songs of all time* have been revealed
Barry Keoghan mentioned in UK Parliament speech during government debate
You may also like
3 years ago
"It's a form of escapism" - Inside the art education programme run for people in custody in Ireland's prisons
3 years ago
Brilliant new Katie Taylor mural unveiled at Dublin bar
3 years ago
Cork artist’s portraits of Irish pop culture icons are incredible
4 years ago
Banksy painting sold for $1.1 million at auction, immediately self-destructs
4 years ago
PICS: A mural of Kanye West has popped up in Temple Bar - Does this mean what we hope it does?
4 years ago
The sculptor who created that Cristiano Ronaldo bust has had a second attempt
Next Page